Today has been an extra mushy day.  I have given Ty about 200 hugs and 1,000 kisses already, and the night is still young.  I'm smothering Gavin with mush, too, but I have to chase him down and tackle him for it.  He likes to put up a fight just for fun.  Ty, on the other hand, has always been a love.  He was born to cuddle and I swear to you his skin tastes like milk and honey.  Strawberries and cream.  Marshmallow fluff.  Now do you see why I can't get enough?

I got word recently that Ty's next MRI will be on Wednesday, January 4th.  When I looked at the calendar my jaw dropped when I realized that is just three weeks from today!  I'm good with this.  Three weeks is enough time between now and Christmas to allow me to enjoy the holidays without having too much anxiety over it... and it is close enough to New Year's that if I am starting to break down I have a worldwide excuse to let loose and blow off some steam on New Year's Eve before I begin picking my cuticles into a bloody mess and involuntarily tightening my shoulders until they scream for mercy.

Ty is doing well.  The Etoposide isn't dragging him down too much - but he fights me TOOTH AND NAIL twice a day when I need him to swallow his Accutane (random, I know, but the high volume of Vitamin A/Retinol has been found to seek out and destroy new cell mutations - it's experimental but also proven to have some success).

Accutane is an extremely goopy, sticky oil that is only available in a capsule because it won't mix with liquid.  Each dose for Ty is also such a small amount, that every bit of it it sticks to any type of syringe (which means I can't use Ty's belly tube because it sticks to the tubing and won't even wash off).  So, what I started doing is carving a hole in Ty's favorite flavored fruit snacks, poking a hole in the medicine capsule and squeezing the oil into the hole.  It worked well the last cycle (2 months ago) but this time he is over fruit snacks and ONLY eats pretzels.  I mean, that's it.  And... they have to be square shaped.  The Rold Gold "Snaps" to be exact.  Next week he will probably switch over to only yogurt drinks or string cheese, then only blue lollipops for a week and so on, but that's just to give you an idea of just how incredibly off his eating is.  Damn chemo.  It is a terrible toxin and I just can't wait until we can stop doing this -- or can I?  I am terrified to stop treatment just as much as I am dying inside every time I give it to him.

My point is that he cries and fights and screams when I approach him with what we call his "vitamins" (technically, we aren't lying :)  The only plus side to the fight is that he really gets a good workout kicking and screaming and carrying on.  His left side is still so weak, but I do see slow and steady overall improvement.  You all know that i expected Ty to be walking by now, but the new reality is that we are looking at several months.  Maybe even another year before he is independently stable again.  But he tries, he improves every week, and he is so happy about any little progress that it makes the rest of us realize how his perspective on life is better than anyone else we know.

To give you an idea of the progress he IS making... yesterday, in preschool, Ty sat at the table and he strung beads onto a pipe cleaner.  This was the first time I have ever seen him do this in his entire life.  You may remember he went through a couple of phases where he loved to make beaded jewelry when he was confined to his bed... but I always had to put the string through the hole for him.  He picked the bead, I helped him string it, then he would pick the next bead.  Yesterday, he did it 100% on his own.  It was a triumph and he has no idea. I was so happy for him.

Here are a couple of funny pictures I took on our way out today.  Ty is loving his hat, and Gavin looks like a gangsta. 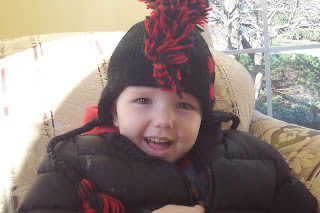 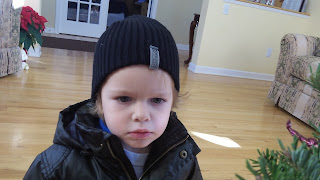 I love these guys.  Goodnight everyone, and thank you for all of your continued prayers and support.  XOXOX - The Campbell Family
Posted by Cindy Campbell at 8:25 PM