Showing posts from August, 2010
Show all

We'll take the good with the bad

August 31, 2010
This morning, Ty got annoyed with me for wiping his nose and accidentally pulled out his feeding tube when he was trying to swat my hand away.  It was startling, but it didn't hurt him and the good news is that he looks so much more comfortable without it.  No more yucky tube sticking out his nose and taped to his face.  He won't be getting nutrition for the time being, but he was so nauseous I'm not sure he minds the delay.  Instead, he is scheduled to have a feeding tube put directly into his stomach later this week.  I know it sounds terrible, but it will be a good thing for the long term.  We will use it to manage his nutrition and medicine with ease.  He will still be able to enjoy all of his favorite things like lollipops and ice cream, but this way he will also get the essentials to keep him healthy.  We need him to be good and strong for the road ahead. Ty is on heavy antibiotics to tackle the menengitis scare, and he is still running a fever.  With every day we h
2 comments
Read more 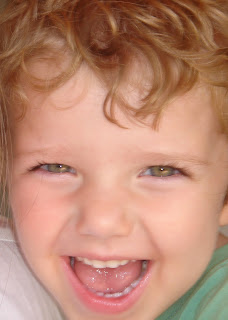 Unfortunately, today was not a great day, but here is a great picture to keep us all smiling as bright as he is.  He's been running a fever for four days now, so the menengitis concerns are looming.  Tomorrow he will be given a spinal tap.  He's on a lot of antibiotics and getting nauseous.  We just want him to feel more like he did a few weeks ago when we took this picture -- and soon he will!!
1 comment
Read more

August 29, 2010
I never thought I would like the idea of my almost 3-year old playing video games, but we had fun tonight playing with his very first Leapster.  In fact, Ty was laughing out loud when I played certain games with him.  He tired quickly, but that's okay, we're just so glad he had a little bit of fun today in spite of everything else that's going on.  Thanks so much to his 6-year old cousin James, who so generously gave up his Leapster so Ty would be able to play games in the hospital.  James, Ty loves you so much and tells all the nurses that you gave him his new game.  Ty is still running a fever, so we are not out of the woods yet, but he is doing okay.
1 comment
Read more

August 28, 2010
We stopped at the house in Long Beach today for the first time in over a week.  It was depressing without Ty and Gavin, and it was sad to open the refrigerator and see snacks and treats that we bought for the boys before we had any idea of what was about to take over our lives.  Lou met with Dr. Schneider this morning.  The good news was that the neuro team wanted us to get him out of bed and get him eating.  Unfortunately, we had a setback from his fever and he didn't have the energy to do much more than sleep all day.  Regardless, we are thrilled because Ty gave us the first smile since last week.  He made a little joke about Grandma and smiled when we called him on it.  It was adorable and it made our day.  More smiles to come as he gets better with every day.
2 comments
Read more

August 27, 2010
Ty had a great night last night, slept very well.  We gave him a sponge bath this morning, during which he was miserable because it was not exactly his idea of a "bath" (no toys, no splashing, no fun).  He was looking good and feeling good all morning and we enjoyed each other.  Right now he's running a fever and not so great, but he's sleeping it off and he'll be better tomorrow.
1 comment
Read more

No pain, no gain. A tough day, but all is well.

August 26, 2010
Ty's surgery today was very successful.  As his parents, it was very hard to stomach the idea of what was involved in placing a permanant drainage shunt in his head, but we have been told over and over again that it is relatively common and will not cause any complications for Ty in the future.  In the short term, the shunt has already been very effective in maintaining the pressure on Ty's brain and he should feel better soon.  The CSF leak is under control and all is well.  Ty is in tremendous pain because they revisited the same site where he had such intensive surgery just days ago (today was the worst day yet), but he should be able to begin eating icepops tomorrow and slowly get back to normal over the next week or so.  We can't wait to get him sitting up and smiling - hopefully soon!  And we will be sure to post pictures as soon as he is feeling better.
2 comments
Read more

August 25, 2010
Sorry for the delays in posting our updates.  The wireless connection at the hospital is not accessible from the ICU, which is where we have been spending the majority of our time.  We are trying to keep up with the posts when we return to the Ronald McDonald house in the evenings where we spend the night -- we really like it here and will post some pictures when we have a chance :)  Home cooked meals every night, but believe it or not there is no McDonald's food - much to Lou's dismay. After a series of tests this morning, our doctors confirmed that Monday's surgery resulted in a leak of cerebral spinal fluid (CSF) which can be very dangerous and needs to be taken care of right away.  Ty will undergo another surgery tomorrow, where the surgeon will involve the placement of a shunt to manage drainage of additional CSF fluid to relieve pressure while repairing the "patch" that the surgeons created in attempt to avoid such a leak during Monday's surgery.  To
1 comment
Read more

Finally! An update on surgery.

August 24, 2010
After 13 dreadful hours in a waiting room, we finally have an update on Ty's surgery.  We met with the surgeons around 9PM last night, spent time with our boy in ICU overnight, and we are happy to share information first thing this morning. One of the neurosurgeons at NYU said this surgery was the first 10 yards in the marathon we have ahead, and I am pleased to report that our tough little guy is off to a GREAT start. The surgeons at Cohen's Children's hospital did what no other neurosurgeon in NYC thought possible -- they removed almost the entire tumor endoscopically, so it was least invasive and he will have a faster recovery. They also resected the tumor without having to remove any additional bone in Ty's spine which is great because that means he may not need a surgical fusion -- another feat that the other surgeons said couldn't be avoided. We still have a difficult road ahead. First, we are concerned with serious infection, menengitis, as a result of a
1 comment
Read more

August 23, 2010
As of 4:24PM, Ty is still in surgery.  We just got an update from the OR and we heard that it is going well.  We will share more news when the surgery is over later tonight.
2 comments
Read more