Showing posts from June, 2015
Show all

My kid is a weirdo and I couldn't love him more 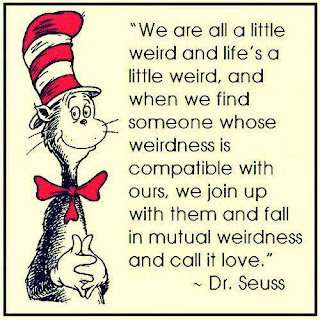 Gavin recently learned the word weirdo and he loves it.  He has been having a lot of fun testing in out in all different ways to see if he can get a rise out of me.  Of course I have told him over and over again that it’s not a “nice” word, which probably makes him want to use it more. “Hey… You… Banana in my banana bread (pointing to the slice of banana bread I gave him for breakfast)… You’re a WEIRDO!”   Me: “Why don’t you want to invite any girls to your birthday party?” Him: “Because they’re weirdos.” Me:  “You love all superheroes, but Superman. Why don’t you like Superman?” Him: “Obviously, because he’s a weirdo.”  I had to stop arguing with him on that one when he pointed out how Superman wears his underwear on the outside of his uniform.  Superman immediately lost his cool status with me. What my sweet boy doesn’t realize is that he is as weird as they come.  And I love my little weirdo.  Which means my husband and I are a couple of weirdos, too, because
8 comments
Read more
More posts