We decorated our Christmas tree tonight.  It was so nice!  I wish I was able to get some better photos - these are terrible - but better than nothing.  Ty and Gavin hanging their first ornaments.  Ty chose a spiderman ornament (although I think he is growing out of his obsession over superheroes just a little) and I gave Gavin an extra sparkley one that he was eyeing.  Of course, it was broken just seconds after this picture was broken.  I saw it coming which is why it's so blurry; I was jumping up to grab it right as the photo snapped.  Ha! 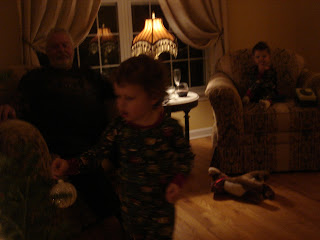 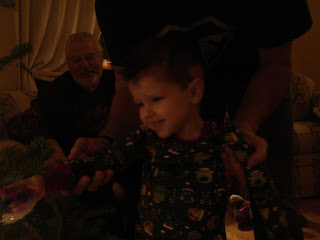 I swear, almost half of the things I unpacked were gifts that we received last year, during our most difficult times.  There were so many beautiful things that I was so happy to unwrap under these much happier circumstances.  To all of you who were here for us last year - friends and strangers - I know I was unable to properly thank so many of you and I just want you all to know how grateful we are.

I came across a card in one of the boxes that was written by one of my closest friends.  It was a simple, beautifully written note that was sent to console me.  I cried like crazy after reading that.  I don't know if they were happy tears or sad tears, I honestly don't, I just know that I am relieved and sometimes it takes reminders like that to help me exhale and relieve myself of some grief that was building when I didn't even know it.

Last year, everything at Christmas was a "last".   I can't even begin to put into words what that feels like.  Ornaments that Ty picked out were purchased so they would be a reminder of the child we were going to lose.  I took endless videos.  I saved everything he drew on. We met with our at-home hospice nurse and I stared at her with confusion.  I thought, "What will she be doing when he is dying?  Will she be rubbing my back, whispering kind words?  I don't want her to!  I don't want her here!!  I wish she would get the hell out of here!!!"  There was a piece of me that hated that nurse.  I know that sounds so unfair and unrealistic, but I can't control the fact that I felt that way.  It was what she represented, I guess.

This year, I am hanging angels everywhere because that's where I feel them... they are everywhere.  I find more magic in the word "believe" because it has new meaning for me.  My eyes are open.  My son has beaten all odds and it is a miracle.  The tumors that existed in his spine last Christmas disappeared and there is no real medical explanation as to why.  The doctors simply don't know (but I do, thank you God).  I don't know what tomorrow will bring, but I am certainly rejoicing over today.