Christmas and the Crazy Lady

I am a crazy lady.  I really am. One of the childhood cancer statistics that especially rings true is the one about the parents... 51% of moms and 40% of dads suffer acute stress disorder within the first two weeks of a cancer diagnosis.  Almost two and a half years later, my stress disorder and emotional instability is far from acute.  It is chronic.

So I have been calling myself "the crazy lady" for a long time now, and today I finally realized that I really, truly am nuts.  Sometimes all I want is to be alone, but every single time I am I go off the deep end.  I am almost embarrassed to retell my story of the day, but at this point why hold anything back?

We had an awesome morning.  Gavin slept late (which means we all slept late) and we played in our PJ's until after noon.  The only tears that escaped were over breakfast, when Gavin announced, completely unprompted, "I miss Ty."  I choked a bit when I answered, "me, too."  Overall, we were having fun and making the most of the lazy day.  Later, Lou decided to take Gavin to Jumpin' Jakes so he could have some fun with other kids.  I was happy to have some time alone so I could wrap the rest of the Christmas presents because there's nothing worse for a person with a stress disorder to have something like that hanging over her head.  My mental clock was already ticking louder and I could hear the birdie in my head saying "Cuckoo... Cuckoo... Cuckoooo".  They left, I got to work.

I was doing really well for a while, but I started getting totally distracted by the quiet.  I needed to turn on some music and as soon as I hit the switch it was "Santa Clause is Coming to Town."  For a split second the sound of Christmas music put a bounce in my step, until I looked over to our empty couch and doubled over in tears.  I cried for an eternity.  I couldn't stop thinking about Ty and how much he loves Christmas.  How special it was last year and how certain I was that he would be with us for many, many more.  How he loved to sing, even though his speech was slurred and his timing was slow - that never stopped him from singing as loud as he could.  I was thinking about how much he would laugh whenever I did a goofy dance for him, which was all the time.  This is where the crazy comes in... during one especially cheery Christmas tune I got up off the floor and started dancing for Ty.  In front of the empty couch.  Trying to hear his laughter or catch a glimpse of his smiling face in the corner of my eye.  It didn't work and I felt like an idiot, but I bet he was watching and laughing at me even if I couldn't hear him or feel him.  How could he not, you should see how ridiculous I looked.

This picture of Ty was taken for our Christmas card last year.  I didn't use it because Gavin jumped off the bench leaving Ty alone, but the photographer was kind enough to fill in some hair where he was still bald above the ears and it looks great.  His hair is thin, he is so skinny, he has a bruise on his arm from bloodwork that morning and he can't stand on his own, but there is no denying that he was a happy boy despite it all.  His smile is the most beautiful smile I have ever seen.  It moves mountains. 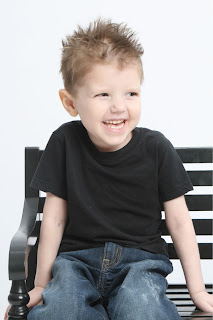 I can't sign off without sharing a sign from Ty, so here is one of many recent signs.  Mely and I went to the office the other day to get some work done for the foundation.  She walked into the room to catch the end of a Mumford and Sons song and she said, "this song always makes me think of Ty."  Of course, I was thinking the exact same thing.  The next song to play immediately after was Hey I just met you; and this is crazy; so here's my number; call me maybe... Mely and I couldn't believe it.  She taught Ty to sing that song over the summer and he used to think it was so, so funny.  I would make pretend it was driving me crazy, that I couldn't stand to hear them sing for another second, so he would only laugh and try to sing it even louder - of course.  They sang it duet style, where Mely sang most of it, and would pass the "mic" over to Ty for certain words.  It was so fitting that we heard it on Pandora at that moment when both of us were swimming in memories of Ty, because I don't think we heard that song once since he passed away.  He is so sweet to send us such a fun little sign.

So, of course, Christmas is just so hard. But we are doing it, we are enjoying bits and pieces of it while the other parts hurt more than anything else. We are honoring and remembering Ty in every way.  We have received beautiful ornaments that adorn our tree with his presence and his beauty (thank you).  We are missing him every second of every day. To add to our sadness, Mely will be leaving for home on Thursday after living with us for more than two years.  I keep promising her that even though we won't be with her physically, we will talk all the time and she is lucky because Ty can and will go with her everywhere :) 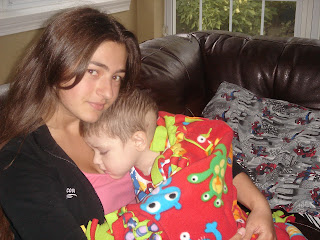