Yesterday was Lou's birthday.  It was not a happy one, but we tried to make the most of the day.  We spent the day together, and went out to dinner with Lou's sister Debi and her husband Rich.  We laughed a lot, all things considered, and talked a lot about Ty (of course).

Instead of recapping the details of Lou's first birthday without Ty, Lou asked me to reflect on last year's birthday.  As some of you may remember, last year Lou turned 40 and he ran his first marathon in NYC that same day.  It was all for Ty.  Lou and Debi ran together for Fred's Team, a charitable team that raises money for Memorial Sloan Kettering (all of the money Lou and Debi raised was tagged specifically for pediatric cancer research).  This year one of Ty's nurses was inspired to run for Fred's Team as well, and I am sad that the marathon was cancelled (but of course, understand that it was completely necessary).

I was so proud of Lou.  26.2 miles is a really big deal.  He trained so hard and out of almost 800 runners on Fred's Team, Lou was a Top Ten fundraiser that year.  Amazing.

The memories from that day are still so vivid.  The night before the race we took Ty to Dylan's Candy Bar in Manhattan for the first time (a place we have visited many times since).  Ty had his first cab ride.  He had his first experience at a sushi restaurant (where he didn't eat anything but the candy from his bag).  At the time he was four months cancer free, he had great upper body strength and was rebuilding the strength in his legs.  The day of the marathon I had to buy him a "New York" sweatshirt because it was colder than we expected.  The crowds made it impossible to use a stroller, so I carried him around Manhattan for the entire day. It was certainly exhausting, but I would do anything to repeat that day.  To hold him in my arms again like that and cheer on his Daddy. 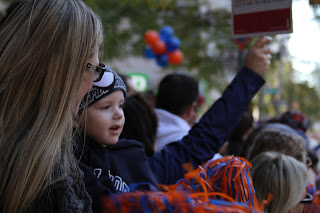 We went to MSKCC to see Lou and Debi as they passed in front of the hospital with all of the other Fred's Team supporters.  That was around mile 18.  Then we walked to Central Park to see Lou and Debi cross the finish line.  After a whole lot of magic and talking our way through checkpoint after checkpoint, the thoughtful security guard at the last finish line bleachers even allowed me to pass Ty over to Lou so he could cross the finish line with our best good boy in his arms.  Ty was beaming.  It was incredible.  I spent that day with Mary, Meghan, Rudy and Lynda and I couldn't imagine anyone else I would have liked to be with.  They helped me out so much that day and made it possible for us to be there for Lou every step of the way. Here is Lou and Debi crossing the finish line with Ty. Unforgettable. 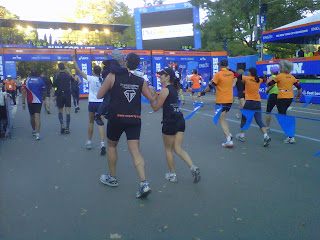 That night, after all of that, Lou and Debi dragged their sore butts out for a delicious dinner with family and friends to celebrate Lou's 40th birthday.  We will never forget that night.  SuperTy himself is the only person that has ever made me more proud than Lou did on that day.  I am so lucky.