So, back-to-school is in full effect and tomorrow is 9/11.  God help me get through September.  Then, next week will mark the day we drove home for the last time from the hospital. Ty's very last time in a car as I stroked his hair, covered his t-shirt in tears  and held him in my arms in the back seat.  How I wish that hour-long car ride could have lasted forever.  Like, if we never get home to where he is supposed to die, then he would never die.

I was just telling Lou how I relish in the memories of Ty's scent.  His hair always smelled delicious, no matter how dirty and sticky from long stays in the hospital and sick spells.  Yet, Gavin can take one small lap around the house and end up with the stinkiest feet and sweat-smelling hair.  No matter what, Ty was always sweet.  Like milk and honey.  He was such a gift.  (Please know that I lovingly bury my nose in Gavin's sweaty hair with just as much adoration, I promise. I am his mother as much as I am Ty's and his smelly little boy head doesn't phase me one bit.)

On 9/11 we lost my best friend's brother, Andrew.  Andrew Brunn was one of the greatest men I've ever known.  He was braver than brave and the true definition of a hero.  We call Ty a hero, but he was five years old and had no idea what he was faced with.  He didn't have a choice.  Andrew, on the other hand, chose to dedicate his life to fighting for our safety and freedom time and time again.  He served in the US National Guard, the NYPD and finally, FDNY.  He accomplished all of these feats before his 27th birthday.  He was, indeed, too good for this earth.  A better man than most. 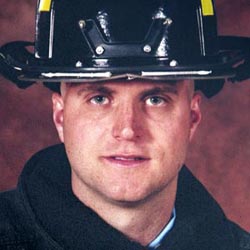 On September 11th I was living in lower Manhattan, Union Square/Gramercy Park.  I was watching the news that morning and randomly caught the videos of the first plane as it hit, assuming it was a Cessna or something small. I was so confused.  I sat on the edge of my bed and continued to get dressed for work until the next plane appeared behind the newscaster out of complete surprise.  I called my mom, because that's what I do when I'm worried.  Then I took the elevator to my rooftop to see it with my own eyes instead of on the TV.  Never did I imagine the magnitude of what was about to unfold.  There was one other girl up there who lived in my building, but I had never seen her before.  She was taking pictures of the towers engulfed in smoke.  We didn't exchange a single word because it was almost as if it was too sacred to speak.  We were silenced by our own thoughts, fears and confusion.  We were deafened to everything around us other than the sound of nonstop sirens.

Not once did I imagine that I would know anyone down there.  I didn't really consider the casualties at all because I was so overwhelmed with confusion.  In fact, I had been helping a colleague plan a dinner event at Windows on the World for September 12th and had been at the restaurant the very night before for a site check.  In my state of shock and confusion, I even found myself wondering where we might relocate the event if there was any smoke damage to the restaurant.  The fact that human lives were and will be lost hadn't yet occurred to me.  Nor did the fact that the restaurant itself would crumble into dust shortly thereafter.

There was no cell phone service in the city because every single person was trying to get a hold of someone.  I was alone in my apartment, so I simply walked to work to find others.  There I could get online and IM with friends.  I learned about simultaneous attacks and messaged my girlfriends in DC and LA.  I called Christina who was working just blocks away.  "You know my brother's down there." she said. "We have to get the f*%! out of here and find him."  That was just before the buildings fell.  I still can't describe the feeling when I heard my friend say "The tower fell, it's falling!"  We all abandoned our phones and computers/email to watch the news in a conference room after that.  When the second tower went down, I shattered the silence of the crowded room when I was the first one to break into loud sobs and gasps.  I was choking and could barely catch my breath.  We had to go.

With an entourage of friends and work colleagues who had nowhere else to go (Manhattan was closed off and they all lived off the island), we headed back downtown to find shelter at my apartment.  Droves of people walked the streets and over the bridges to get out.  As we marched down 3rd Avenue, a man covered in soot and blood ran in the middle of the street in the other direction yelling "you're going the wrong way! Don't go down there!"  It wasn't until that moment that I started to fathom just how incredibly detrimental the situation was.  Just how many people must be hurt and dying.  Before that I was locked in denial, trying to stay positive.

Christina and I spent the day looking for Andrew.  We walked down to his firehouse where we eventually found her sister-in-law.  We waited. One firefighter came back, covered in thick gray dust, and he could barely speak.  He was the only one that showed up at all that day.  The only one ever to come back.

The hours that followed dragged on for an eternity. Christina and I spent the entire day wandering and waiting, just me and her, while the others were all back at my apartment.  We checked all of the inpatient lists at the various hospitals and triages - but no patients were coming in.  "Where are they all?" I wondered, in my ever-positive state of denial. We finally sat at the fountain in Washington Square Park until the sun began to set.  Time to turn in, head home and watch the news for more updates.

During our walk home, Christina stopped on the brick sidewalk at Union Square park and closed her eyes.  She stretched out her hand, and raised her head as tears formed in her eyes.  I didn't know what was happening and didn't know what to do but to watch her... entranced.  I don't know how long she stood there, but I know when she "came back" she started freaking out.  She cried and in between her tears she managed to tell me that she was sure her brother had just died.  That she saw him, that he reached for her, that he was totally and completely with her, and now he's gone.

They found Andrew Brunn in a stairwell that was still slightly intact.  His body was found covering that of a civilian woman, along with three other firefighters and another injured civilian.  His family was able to have a wake with an open casket, followed by the most breathtaking funeral you can ever imagine.  Movies can't even do such a funeral justice.  I do believe because he was found like this, it is 100% possible that he chose that time of day to go off to heaven.  That it is possible he was unconscious, but perhaps still breathing, until we gave up the search and headed home.  I like to think it was then that he found Christina to say "You can stop looking for me, now.  I am right here with you.  Forever."  This was his fire truck.  Ladder 5.  God Bless Andrew Brunn. 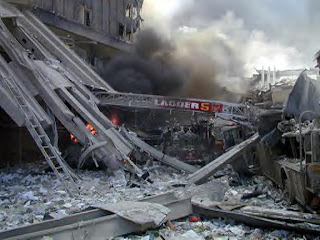 I am just as convinced that Ty chose the very minute that he went to heaven, too.  He waited for the preacher to leave.  He waited for me to walk him to the door and return to the room where Lou laid next to him before his eyes shot open for one last stare into my eyes.  He wanted to leave during that beautiful day, while the sun was still high, so he could soar among those incredible clouds and over the red/golden treetops.  I know this with all of my heart, and it gives me comfort.  If I hadn't witnessed Christina's spirituality throughout her own grieving, I might not have been so open to these miraculous events with Ty.

Gavin's first day of school was a success.  He was so happy to be back he ran off without even giving me a kiss or hug goodbye.  I love his nursery school so much, it is a special place, but driving up that hill was like knives to the heart.  Walking down the hall to the classroom just before Ty's was even harder.  I never had to do that before.  Last year Gavin was in the room to the right, not down the hallway to the left.  My entire drive there, and my entire time inside that school, I wore my sunglasses and cried thinking about how Ty loved it there so much, and how short his time was there.  He was so robbed.  And so are Lou and I.  We are ROBBED of the first day of school and everything that goes with it.

Sorry.  Sucky September.  That's all I can say.

Gavin, on the other hand, is loving back-to-school.  The only thing that he said of concern recently is that he is "gonna be mad at God forever!"  When I asked him why, he answered, "because he WON'T let TY come BACK!!"  Then he crossed his arms and gave me a "humph!"  I get it buddy.  I know.  See that empty spot to your right?  That's where Ty should be.  That's where he is!  xoxo.