Tonight I am overwhelmed by cancer and the unfairness of it all.  Not just for my family, but for all of us.  I don't think there is a person out there who hasn't been affected by this putrid disease.  Kelly should still have her mother to share her children with and ask questions.  My dad should still have his sister Mary to share his memories with.  Marshall and his three small children should still have his wife/their mommy, Stefanie. Chase should be able to play with his big brother Tanner.  Maya and Woody should have Ronan.  I could go on and on and on and on.

My friend Meghan is on my mind.  I want to call her so badly, but I can't risk waking up Ty (he is sleeping well).  During one of her visits with me and Ty at Sloan Kettering (we were roommates in Manhattan for a long time, and she still lives there), we went for coffee and she told me that her friend, Elizabeth Walker, was just diagnosed with Non-Hodgkin's Lymphoma.  She was so worried, and I promised her, with complete confidence, that Elizabeth would be fine.  I was 100% sure of it.  After a year and a half in treatment, she died just two weeks ago at 33 years old.  My heart is bleeding for her family and friends.  She was beautiful and I know how much Meghan loves her which means she had to be funny, kind and magnetic. 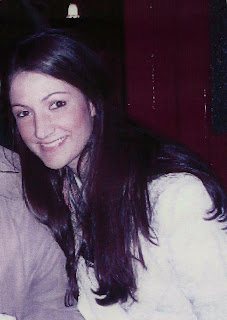 I am sitting in Ty's Captain America room, as I usually do late at night, and I'm amused by the occasional interference I am hearing from Ty's monitor.  Someone emailed me recently about how a hospice nurse told her the interference is from angels who are flowing in and out of the room.  I am comforted by that even though I have to hold back the silly protective mom in me from running into the room to scare them off.  There is this funny feeling of "I am his MOTHER!  He is MINE!  I will keep him safe and I will take care of him!"  It's only natural, I think.  Like I said, I want to hold his hand, walk him into heaven and never let go.  It's very hard to imagine anyone else "taking care of him" and frankly, for as much peace as the image of his guardian angel brings me, it doesn't take away my instinctual need to be the one and only who is there for him.

It was suggested that maybe I should give Ty a lock of my hair at the time of his passing (probably since my previous idea of cutting off my hand is impractical).  As much as it is horrifying to think about these details, I decided that yes, I will do that.  I want Ty to be cremated with part of me (other than the fact that my heart will always belong to him).  It is symbolic and I like to think that part of our physical beings will always be together.

I cried a pretty big cry today.  Twice.  I think I needed it.  This evening I overheard Lou with Ty, who was wide awake and listening so intently.  Lou took Ty's hand and shook it like a handshake.  He said "always look 'em in the eye when you shake hands.  Be confident, don't be shy.  But you already know that.  You have been more of a man at five years old than some men are at 50 and you figured it all out on your own.  I'm so proud of you."  Lou was trying to hold back his tears and I had to leave the room so I could hide mine from Ty.

Then, when I was putting Gavin to bed I laid there and had a very overwhelming sense of calm rush over me.  I felt that all of these prayers were working.  I thought about how we should bring Ty back to Sloan Kettering for another MRI - maybe they were wrong?  Maybe this is all just chronic hydrocephalus or something else fixable!!!  I went from Gavin's bed back to bed with Ty (who had started whining) and when I saw the sweat, heard the rumble in his chest, saw how his body is just skin and bones I remembered the truth.  Oh yeah.  He really is dying, isn't he.  I told him "I love you" a million times.  He didn't respond.  I wanted to hear it soooo badly.  His adorable voice saying "I wub you too," but it didn't happen.  Instead, I put his limp arms around my neck, rested my forehead on his, and soaked his pillow with my tears as I prayed for his healing miracle.  I will never ever stop.  Hope is never false and it is always empowering.

We had a reporter and a photographer from the Journal News come to our house today.  I was asked a lot of tough questions.  When the photographer asked me to reflect on what it was like to plan for Ty's passing, I spoke so matter-of-fact about it with almost no emotion.  I was so taken back by how easily I spoke about it, it was almost embarrassing.  Later I realized that it was because all of this feels so incredibly wrong and foreign to me.  Like we are doing these things (talking about the suit, the casket, the lock of hair, the "celebration" gathering) but it is as if it's about someone else.  Not us.  Not my family.  It just doesn't seem real.  Something this horrific can't really be happening to my family.  Not to THIS kid :)

Overall, you should know that today was terrific.  Ty slept well last night without any vomiting and he doesn't have too much pain.  He was content during the day.  We listened to music, read books, and talked a lot about Christmas (because what kid doesn't love Christmas).  When I asked if he remembered the name of his "Elf on the Shelf" I was so impressed when he meekly whispered "Georgie Bell" (Ty and Gavin had a yelling match because Ty wanted to name him George and Gavin wanted to name him Bell).  We had SO MANY SMILES and I'm sorry to say I couldn't capture one of them on camera!!  Lou even got him to laugh!  All smiles were compliments of sheer silliness.  We joked around and teased one another and Ty just ate it all up.  This photo wasn't taken today, but I don't think I shared it yet so I thought I could use it as a substitute :)  His face was a bit swollen on this day, but his smile is still as beautiful as can be. 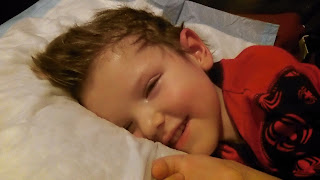