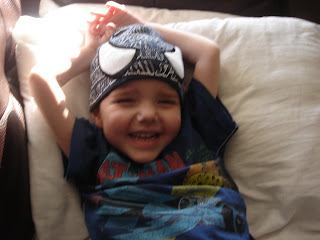 Ty Louis Campbell is gone, but his story continues.  This is our promise to him.  His impact on the world around him gives his short but inspirational life such meaning.  His soaring spirit will continue to fuel a fire in our hearts, and strangers around the world will continue to fall in love with the little boy who fought so valiantly.  The little boy who hurt so much, but maintained a bigger, brighter smile than the healthiest of children.

Ty never did break his fever.  He never really woke up.  Not until he decided to leave this earth and fly freely among the clouds.  At that very moment, he was awake.  He had returned to Lou and I to say goodbye.  To say our hearts are broken would be like saying it tickles to have your stomach ripped open with a spoon.

I went to bed last night with so much worry on my mind, but I was able to fall asleep because I was calmed by the fact that in his semi-conscious state, Ty seemed so incredibly peaceful and comfortable.  I laid down next to him, I put his arms around my neck, and I fell asleep to the sound of his soft, garbled breathing.  In my head I thought, "If he doesn't wake up around 3 in the morning and ask to go downstairs, he isn't going to wake up from this."  In the morning while he continued to sleep, I sat with my mother and I finally heard the words come out of my mouth, "I think Ty is going to die today."  I didn't want to know this, to feel this, but I knew.

All morning I was in and out of the bedroom because I didn't want Ty to hear me crying.  I didn't want to scare him or to think he was worrying about me.  I would wander around the house, aimlessly trying to catch my breath before returning to the room once I felt better.  We called the church and asked for the pastor to visit.  We made sure my Dad was on his way, and we had all of our parents here to visit with Ty.

Around noon, I was finally compelled to just stay in the room.  No more walking around the house.  I am so glad my subconscious helped me settle down so I could stay there with Lou and Ty, holding his hand.  The pastor arrived and he was so kind and gentle.  He helped us say a beautiful prayer for Ty and then he left.  I walked him to the door, came back to the room and the second I turned to look at Ty his eyes shot wide open.  It was as if his eyes were flickering open in a way that I can only describe as magic.  Lou and I couldn't believe what was happening.  We tried to ask him what he was seeing, but he didn't answer.  Lou told me it was time and it took every ounce of my being not to scream and wail and fall to the floor.  I couldn't do that to Ty.  I needed to tell him everything was going to be okay.

I scooped Ty into my arms while Lou wrapped us both in his.  For a moment, Ty's eyes remained open and I stared into them so intently because I needed to be sure that he was witnessing something beautiful.  I promise you he was.  Through our tears we assured Ty that it was okay for him to go because he was taking us with him in his heart.  Over and over we told him I love you.  We told him how proud we are of him.  We thanked him for letting us be his parents.  We encouraged him to play, to eat candy in heaven and to slide down the rainbows into huge puddles of mud.  His last breath was a tremendous gasp - not because he was gasping for air - it was a gasp like when you witness something beautiful and exciting.  Like fireworks.  I have to believe with all my heart that he was excited.

When our beautiful nurse came to pronounce him, she was so warm.  She shared with me her experiences and they gave me so much comfort knowing that she witnessed others passing who proved to be similarly happy and at peace.  She also told me that when she came to see him yesterday, she felt very strongly that Ty was already gone.  When she told me that I realized that maybe she was right.  I like to think that he was exploring, being greeted by his friends in heaven and deciding what to do.  When he opened his eyes he was showing us that he was seeing pure beauty and he just was coming back to us to say goodbye.

Ty's beautiful little body stayed warm for a long time.  I didn't expect that.  The top of his head.  His back.  His belly.  So soft and so warm, we rested our hands there for I don't know how long.  We took turns holding Ty.  Walking around with him and kissing him.  It felt so good to hold him on my shoulder and kiss the crook of his neck without hurting him.  Lou was squeezing him and loving him all up, too.  Finally, to hold him without hurting him felt so beautiful.  We stayed together, just the three of us, for the next five hours or so before inviting our family back upstairs.  I will always cherish that private time we had together.

After a while, Lou and I gave Ty a warm bath.  Lou washed his head, I washed his feet.  We kissed his skin ten thousand times.  There were as many tears in that tub as there was bathwater, but it was beautiful.  He was so beautiful.  Every inch of his body.  We dressed him in his white suit with a blue pocket square (his favorite color).  We put on all of his jewelry and he is holding his rosary beads from his christening.  We cut his hair for us and we cut ours for him.  We filled his pockets with a blue lollipop from his favorite girls at the bank, a chocolate gold coin, a 2 dollar bill from his great grandfather and some extra money for candy.  My dad put something special in his hand and we have a lot of other things that we will include in his casket tomorrow.  Ty is taking lots of his "loot" with him.

Right now Ty is still in our bed.  He is all dressed up for heaven.  He has a smile on his face.  I know you all think that sounds crazy, but every single person who has come to say goodbye to him has validated it.  As I am watching his presence leave his body more and more, the hint of a smile on his face becomes even more prominent.  My sweet, sweet, good boy.  He was always quick with a smile, right?  He is telling us he is happy.  It may seem strange that he is still here, but our plan is to have him placed in a casket and then cremated.  If a person passes away after 12noon, he or she can't be cremated until the following day.  Ty died at 1PM and there's no way we would leave him with anyone but us right up until the very end.  We will ride with him in the car tomorrow morning.  We will be with him until the very, very end.  Just as he is with us.  I have felt his presence in this room all day long, and I feel him with me right now.  I hope I can always feel him... at least when I need to the most.  I am so scared for Lou and myself in the days that come.

There was an amazing prayer chain planned for Ty at 7PM tonight.  All morning I told myself that the prayer chain was my last hope.  I wasn't giving up until then.  Maybe all of those voices asking for Ty's healing miracle at the same time would wake him from his sleep and heal him.  So when Ty started slipping away earlier, I almost yelled "No!  Not yet!  I changed my mind, don't leave us!"  As much as I wanted to scream those words at the top of my lungs, I remained as calm as possible and instead allowed Ty to give us the greatest gift of peace, serenity and ever-lasting presence.  I imagine he saw what an incredibly beautiful day it was today - by far my most favorite kind of day - and maybe he just didn't want to wait any longer.  He wanted to take off into the crisp fall air and fly over the golden trees into the sunlight.

At 7PM this house became flooded with tears.  Lou and I remained alone in the room with Ty to say our prayers before allowing anyone to come up and see him in his suit.  From here we could hear all of our closest family members breaking down.  The cries and sobs could no longer be disguised.  Outside our house were hundreds of people with candles, united in prayer.  In town there was another circle of friends gathered - lighting candles for Ty.  There was a vigil held for Ty in Long Beach on our boardwalk.  All over the place, people were praying for Ty.  What an incredible way to honor our incredible little fighter.  Thank you so much, everyone, for loving Ty and for praying for his miracle.  Just because he wasn't healed, doesn't mean we didn't all witness a miracle.  Over the past two years, I've seen several.  Ty Louis Campbell's existence alone was a miracle.

I still believe.  I hope you do, too.

God Bless you, Ty.  Please visit me in my dreams.  I don't know what I'm going to do.
Posted by Cindy Campbell at 1:51 AM