Today was a rough day for Ty, which is so unfair.  Lou and I woke up so sure it was going to be the best birthday ever!  It had to be, right?  We couldn't wait to see his face when he saw his gifts, his Grandma and Pop-pop, Nana and Papa.  All of his favorite people.  We wanted nothing but the greatest day for him.

On a positive note, there were so many beautiful things that happened today.  Let me just begin by saying how grateful Lou and I are for all of the generous donations to Ty's foundation and the upcoming 10K, the Ty shout-out on Good Day New York this morning!! (that was so special), the powerful prayer chain, the amazing gifts that were delivered to our doorstep, the fun filled packages and the heartfelt birthday wishes. The birthday wishes started at sunrise and my phone continues to beep non-stop with new messages.  Amazing.  Thank you.

It's after 1AM and I'm just settling down, but of course I can't sleep.  I want to catch up on all of the amazing comments and messages that have been sent our way via the blog, email and facebook so I'm trying to keep this post short.  We are so touched and your stories keep us strong.  Plus, all of those countless photos of your kids being kids are a true testament to the happiness Ty is bringing to this world... thank you, thank you, thank you.  Unless requested otherwise, I will be collecting them and displaying them in a fun way for everyone to enjoy, so please keep them coming!

Other highlights of the day included countless balloons, ridiculous cakes, non-stop candy and a MAGICIAN!

Ty was completely spoiled with the most amazing balloons today and he loved it.  We collected all the balloons he's received over the past week or so and we keep them all at a distance where he can see them and it makes him happy.  He also has a totally awesome collection of pumpkins that have been decorated all different ways and they make him smile.  They are also on display where he can see them at all times.  Then there's the candy... I can't even begin to tell you how much candy this kid has and how cute he is about it.  If he is called, he will certainly be going to heaven with a blue lollipop in his pocket.  Have you ever seen a gummy bear this big?  Neither did we.  Ty thought it was terrific.  This was the closest I could get to a "smile of the day." 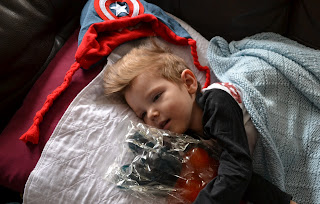 One of the greatest surprises was his cake.  I had no idea this was coming, but our friends Charlie and Rachel arranged to have a cake for Ty that had all of his favorite things.  Max and Ruby, Captain America and a Carnival.  I want to give credit to the creator, I believe she said it was "Patty Cakes?" a local friend who makes amazing cakes.  Then we received a delivery of the coolest and most delicious cupcakes we've ever seen.  They are already half gone.  Thank you! 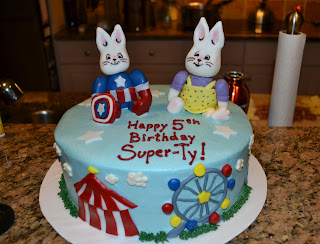 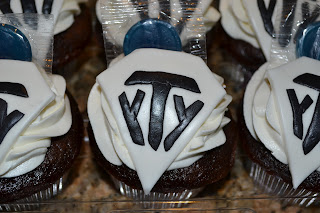 Before Ty knew that Ty had relapsed, we were planning a huge carnival party for Ty.  We had boxes and boxes of carnival decorations and prizes delivered, and Papa was going to make a bunch of real carnival games.  It was going to be a huge party and I even created the invitations.  We were so close to making it happen for him.  Ty even wanted to have a dunk tank and Lou and I were actually considering it.  Of course, now Ty is way to sick for anything like that whatsoever, but we hoped to bring out some of the smaller games we purchased to show him while we had family over today.  He never felt well enough, but we will hold onto them just in case.

This disgusting beast he is battling showed little mercy today.  Ty was tired, he was sick, he was swollen, he was sweating profusely and he was uncomfortable.  Even the magician act was cut a bit short because Ty started throwing up and it was really bad.  I just knew something was wrong during the whole magic show because he didn't look right.  Poor kid, I didn't realize how strong he was being... just trying so hard not to get sick.  He made it just until the very end and he couldn't hold it back any longer.  It broke my heart.

I do worry that Ty is taking a turn for the worse because today he was so different.  But then I think about how we all held hands at 7PM tonight, our whole family gathered together in a beautiful circle of love and prayer around Ty, and it felt so powerful knowing that thousands of others were doing the same for Ty.  I imagined that when he got sick this afternoon he was getting all the evil out, and that he would begin improving.  Then, tonight, I gave him his midnight medicine and he got so sick again.  I was worried that he might be dehydrated so I flushed the medicine with three teaspoons of water in his belly tube.  Just three teaspoons!  He threw it all up ten minutes later.  We have seen this kind of reaction before and it's not good.  Hopefully we can find a way to get it under control with increased anti-nausea medication starting tomorrow.  His hospice nurse will be here tomorrow so I'll be sure to keep you posted on what she thinks about all of this.

My mom and dad are here and staying the night.  When she was going to bed I gave my mom the biggest hug and just sobbed and sobbed.  I'm so glad she's here.  We talked a lot about Ty, all he's been through, how much we love him, and how even my dad cries at night over how unfair it is that he may never get to ride a bike or jump on a trampoline.  I confessed that I feel like I will be failing Ty if I let him go, because he relies on me to always be there.  He's been so sick for so long and Lou and I have always been at his side, every single step of the way.  Even when he went to preschool for five months, I was allowed to be in the classroom with him because of his disabilities (those were my favorite days).  We have never been apart and he has been a permanent fixture in my arms for so long.  How can I imagine him moving on somewhere without me by his side?  I worry that he will be looking for me.  What if he gets scared??

My mom told me to remember what it was like when I dropped off Gavin at preschool for the first time.  How disappointed I was when he let go of my hand to run off with his friends with barely so much as a "goodbye."  She told me to imagine all of the children that will be there to meet Ty.  How excited he will be to run off and play with them.   He is going to be so happy to walk, run, jump and fly!!  Whatever it's like, it's going to be wonderful for Ty because it simply has to be.  I am so scared for how I am going to handle it all, but I do believe that if we don't get our big miracle, the miracle will be his accomplishments in five short years, and how he has touched the lives of so many.

My mom has several friends who have lost children.  Some of whom have never recovered and who continue to blame God decades later.  I told my mom not to worry about me.  Of course, I know I will get angry as I grieve, but that the real anger has left me a long time ago.  Even if I look back on this blog, I see the periods of time where I was bitter and angry.  I believe that watching Ty suffer for two years has helped me let go and let God in a peaceful way.  I hope I can remember that in the darkest of days that likely await me.  God help me. 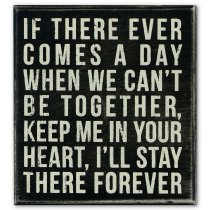 Posted by Cindy Campbell at 2:13 AM