This morning, Ty had tubes put in his ears.  He had this procedure done without anesthesia.  He's FOUR years old!  What a brave boy, but you all knew that.  It went so well.  Better than I ever could have imagined.

The ENT that agreed to do it told us flat-out that he has never performed the procedure on a child without anesthesia before, but that he was willing to do it if we wanted him to.  As you know, we are eager to begin hyperbaric oxygen therapy and didn't want to delay any further waiting for surgery w/anesthesia in a hospital setting.  The tubes are necessary because the chamber is under very high pressure and Ty is too young to pop his ears on command.  Now that this is over with, I will go to Phelps for his orientation tomorrow, and he begins on Thursday.

Last night I didn't sleep well at all.  We had to be up and on the road very early for the appointment with the ENT, I had a lot on my mind and I was so afraid that the appointment wouldn't go well.  The procedure involves cutting a hole is Ty's eardrum and placing a tube in the hole.  It hurts.  Not much, but it does hurt.  And, Ty had to be very still the entire time.  He was nervous, too, because he hates being at any doctor's office and he said "what doctor gonna, do, Mommy? I don't want doctor do anyfing to me!  Pweeze Mama!  I don't want doctor to do anyfing to me!"  Could you imagine the pounding of my heart.  I am still sick over it.  But, our little fighter was a superstar.  He barely even flinched.  Barely shed a tear.  He never ceases to amaze me.  Afterward the woman assisting the procedure followed me out to the elevator just to say that Ty is amazing and that she will be praying for him.  People are so kind.  Ty touches so many.

Here he is in his special chair, with his hand guards on, his neck brace and his chubby steroid cheeks.  He is such a good boy through all of this.  He's happy to go in his chair.  He wears braces on his feet for four hours a day.  We stretch him out five times a day.  He gets OT, PT, speech and feeding therapy.  He also went to the classroom here for the first time today.  That was beyond hard for me.  Ty embraced it.  He was actually full of smiles during circle time and music, but I could barely stand to be there.  To watch as he wanted to sing along to his favorite songs but couldn't get the words out.  He was more disabled than most of the others, unable even to lift his arms and clap.  It was as heartbreaking as it was inspiring.  Watching my son smiling and enjoying his first day at the new preschool since his whole life changed so drastically makes me so proud.  He doesn't dwell on his inabilities.  Instead, he appreciates a funny book, a snappy song and a silly story. 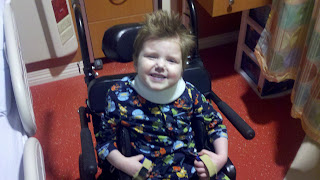 We threw a small kid's party for Gavin's third birthday party on Saturday.  I have so many pictures to upload and share, but I don't have the camera with me and with all of the services we have planned for Granny this week, I may not be able to share for a few days.  In the meantime, however, I have to say thank you to:

SEASIDE CELEBRATIONS, for throwing Gavin such an amazing party, and for leaving me with zero responsibility other than showing up.  It was the most perfect party, and we will never forget all that you did for us.  Debbie - XOXO times a million.

ICING SMILES, specifically, Jennifer Jackson, who volunteered to create the most amazing Toy Story Cake for his birthday.   When I picked up the cake at her home, I had tears in my eyes several times because I saw that she poured her heart into it.  So much work.  So beautiful.  It will be the number one picture I post as soon as I get to upload everything.  It was so special.  Jennifer, thank you, thank you, thank you.

Anthony and Yasmine. For babysitting the birthday boy even when you had Theo's own birthday to celebrate. He had so much fun, it was such a huge relief for me, and I still can't thank you enough.

Kate, John, Sean, Patrick, Aaron, Nate, Jake, Luke, Eva, Theo, Julia, Chloe and Evan.  For being such great friends to Ty and sending him his very own "candy cart" for his new hospital room.  He is completely obsessed with it.  OBSESSED!  He says he will be making several candy houses, and a candy castle in his free time.  Out of the blue, at any given time of the day, Ty will say "I still can't believe I have my OWN candy cart."  We take out each drawer and sort through all of his loot several times a day.  Several times an hour :)  To say he loves it is an understatement. 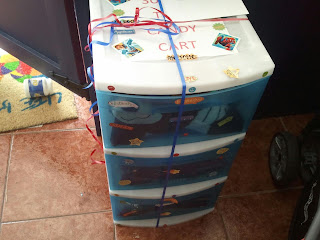 Speaking of Candy Houses - Joy Marielle, there will be something in the mail for you from Ty!  You are the best!