I've been gone for days, so I have a lot to share!  Bur first, a couple of favors to ask.

Please go to the Gap Casting Call, search for "SuperTy" and "like" him on Facebook.  Imagine how much childhood cancer awareness we could spread if he was chosen!! The winners will be announced on Monday, so we only have a couple of days left.
CLICK HERE TO "LIKE" TY

Also, one of Ty's beautiful nurses will be running her first marathon for Fred's Team this year.  This is such a huge undertaking.  As you may recall, Lou and his sister Debi raised around $30,000 for the cause when they ran last year.  It is an amazing foundation and the funds raised go specifically to support research for rare cancers (consisting of mostly pediatric cancers).   She needs to raise a minimum of $6,000 and I know you can help her do it!  Even if it's just $5, it would be so appreciated :)  Slowly but surely, she is getting there!
CLICK HERE TO SEE HER PAGE

I'll start by sharing some of the fun photos from Gavin's 3rd birthday party last weekend.  He is getting so big, and I am miserable being so far away from him for so long.  I will be home for half the day tomorrow and I am praying for nice weather so we can go outside and have some fun.


Thanks again, to Jennifer Jackson and Icing Smiles for the most amazing Toy Story cake.  It was so special and Gavin went totally nuts over it.  And to Seaside Celebrations for throwing him a party to remember.  And, to Janice, for all of the beautiful pictures!!

Now, the long, detailed updates on Ty.  I'll start with how he is doing in general, which is okay.  Lou and I are going to stick it out at the PT facility for at least a few more days, but we aren't convinced that the benefits of therapy received while inpatient outweigh the emotional toll it is taking on him.  Especially with all of the back-and-forth travel we will be doing to Phelps for the oxygen therapy.  We are considering switching to a daily outpatient routine in a week or two so he can spend his evenings at home with his entire family, but there are a lot of details that Lou and I need to iron out first and that could take a while.  If we check out, we want to ensure a smooth transition to outpatient care and that takes a lot of time to arrange (insurance-wise, acceptance from the facility of our choice, scheduling and a number of other annoying details that I don't need to get into).

Ty is in the hyperbaric chamber for the second time as I write this.  Each session takes almost 2 hours.  I need to attach a photo so you can understand what he is doing right now.  This is almost exactly what the chamber at Phelps looks like, only Ty is in there alone with two doctors and he is on a stretcher.  Watching his Max and Ruby DVD (of course).

If he becomes inconsolable I am prepared to go inside and be with him, but so far he has been such a good, brave boy they haven't needed me.  I'm shocked and a little disappointed because I wanted to be in there with him, but also beaming with pride over how amazing he is.  This morning he actually said "Yay, rocket ship!" on our way to the appointment.  Of course, he whines and cries his fair share as he is being examined beforehand, and he hates putting on the hood, but in less than five minutes he calms down and relaxes for the duration of the treatment.

When I first spoke to the HBO doctor, he told me we would start with 10 - 15 treatments and see how he's doing.  He hopes by that time we will see some slight improvement in Ty's head pain.  If he is doing okay and tolerating the therapy, then we will continue for another 15 treatments and take it from there.  In total, Ty is approved for 30 initial treatments, and that may be extended to 60 is it proves to be working really well.  Wow.  I was not prepared for that news.  I didn't realize what a long, tiresome commitment this would be.  But, if it works we're happy to do it, right?  It is one of only two proven therapies that help to speed up the healing process where radiation necrosis has occurred.  His doctor makes no promises, but he is very hopeful and I certainly like that.

Just to make matters complicated, in true Ty style, we had to rush to MSKCC for an MRI after oxygen therapy yesterday.  It had nothing to do with the chamber, rather, Lou and I were very concerned over his increasing head pain.  He had a terrible day on Wednesday.  When I returned from my grandmother's funeral I laid down in bed next to him while he cried about his head pain and I thought, "this is the beginning of the end... I think he may be dying."  I was so worried about him.  Then I thought, "or not... because Ty is amazing and he may be running a marathon in a few years."  I just want my poor boy to feel better.  He hurts so much.

Can you imagine what it's like to be me and Lou?  In the same conversation over breakfast we talk (1) what sports we will allow Ty to play when he recovers fully (no football because of his shunt, but maybe baseball would be okay), (2) what it might be like for Gavin at school if his brother remains a paraplegic forever (will he be embarrassed of his brother?  made fun of?  we all know kids are cruel), and (3) what memorial services we want if, God forbid, Ty dies.  All of this over scrambled eggs.

I've been so tense that my shoulders feel like they are in my ears, but the MRI went very well.  It was incredible, in fact, because the necrotic lesion on his brainstem appears to be diminishing yet Ty is only the same or worse.  In fact, our doctor is completely baffled and will be discussing Ty at tumor board on Wednesday.  Lou asked him to please share the scans with neurosurgery and radio oncology so they can think about it beforehand.  I half-joked that maybe the answer will come to someone in a dream, but Ty's situation is so strange that I believe it might be the only way someone figures out what's really wrong and how to properly treat him.

So, tumor board is Wednesday night and we hope to hear about it on Thursday morning.  Until then, we will continue moving forward with the hyperbaric oxygen therapy because the assumption remains that Ty is suffering from radiation necrosis (although that is debatable after the last scan).  We are beyond frustrated but there's nothing we can do but remain patient as usual.

Before I sign off, I attached the poem that the priest read at Granny's funeral.  You may need to click on it to enlarge so you can read it, but it's a really nice way to think about how we live our lives.  Love you, Grandma.  The dash on your gravestone is most admirable :) 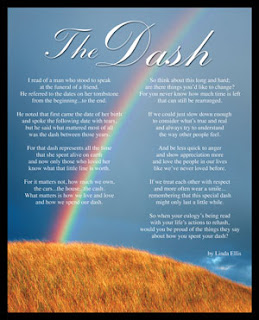