A fateful turn of events

News that had me almost in tears this morning has resulted in a serendipitous surprise.  Right now Lou, Ty and I are in the car heading home for the weekend.  After a month in and out of the hospital with no end in sight, it turns out that we will be spending Easter together as a family after all!  We are all a tiny bit scared to be going home under such difficult circumstances for Ty, and a whole lot happy at the same time.  Every once in a while Ty says to me that he’s not ready to go home because his head hurts too much, but for every time he says something like that there are three or four other statements about Gavin and home that overpower his fears (and ours).

At first it looked like we would be stuck at the hospital until a bed became available at the Blythedale rehab facility – which all of a sudden meant no sooner than Tuesday of next week (the status on some patients expecting discharge today had changed as of this morning).  I was climbing the walls at the thought of poor Ty (and all of us) stuck in limbo for days during such a critical time for his rehabilitation.  It all comes down to the insurance company.


In order for our insurance to approve payment to an inpatient rehab center, Ty had to be transferred as an inpatient from Sloan Kettering.  However, no bed was available at the rehab facility at the time that Sloan Kettering was ready to discharge us.  We were told that if we went home, we could risk a future denial from the insurance company (for example, if Ty is “well enough” to be home for a few days, then he doesn’t require inpatient care and could be seen as an outpatient instead – much cheaper for the insurance company).  At the same time, the insurance company denied coverage for Ty’s extended stay at Sloan Kettering since his medical needs had been adequately addressed.  All day we waited and waited to see how this would net out.  Where are we supposed to go if the insurance company says we can’t go home but we can’t stay at Sloan, either?  Finally I had a breakdown around 3PM, crying and losing my mind, which prompted Lou to get more aggressive with all parties involved and find out what was going on.  He was on a mission.   He marched through the halls of the hospital to track down everyone, and he got on the phone with Blythedale.


In the interim, I stepped out and visited St. Catherine’s church for some solace.  Ever since my faith was challenged at the time of Ty’s diagnosis I have found serenity from sitting in a pew and sorting through my thoughts and tears.  Magically my confidence is restored, my perspective regained.  I walked the stations of the cross and returned to the hospital with sanity and peace of mind.


Everything ultimately worked out better than I could have possibly imagined.  Thank you, Lou, for shaking things up and putting your foot down.  For being so strong, especially when I am weak.  “We’re leaving,” he said and that was that…


…I started writing this while we were on the road, and I am picking up where I left off in the peace and quiet of home sweet home.  Everyone is asleep and I am waiting until it’s time for Ty’s pain meds before joining them.   We finally got home around 8:30PM and were greeted by an ever-gregarious Gavin who was up past his bedtime waiting for us.  He was SO excited to see Ty, he was practically tripping over me trying to reach for him.  He said, “Put Ty in his spot, Mama!  Put Ty in his spot!” Ty owns the corner spot on our couch ;)  Then he came running over with a mini-puke bucket and climbed over me to put it under Ty’s chin.  “Here you go, Ty.  Here you go.”  It was sweeter than sweet, and kind of sad at the same time.  I can only imagine what goes on in that almost three-year old head of his.  He knew Ty was sick and in the hospital, so I guess he thought that meant he was going to “get sick.”  Similar to when he told me Ty must have eaten too many jellybeans.  For as young as he is, he understands more than he should ever have to understand.   One thing is for sure, those two boys love one another.   I am so lucky.  So grateful for them both.


Tomorrow we have to return to the hospital for an infusion of Avastin, but hopefully it won’t take too long.  There’s a whole ‘nother saga with insurance as to why this is necessary, but I won’t bore you with those details.  I just hate the idea of having to tell Gavin we are going back.  I hope he believes me when I promise it’s only for the afternoon.  I hate the idea of putting Ty in the carseat for such a long round-trip again (he has to wear a neck brace and he’s so uncomfortable in general) but we have no choice.   I hate that he will have to get needles again, too.  All of this, however, will be worth it when he begins to recover from this latest setback.  The healing has already begun.  He is lifting his hands and moving his head and I just know that he will continue to improve daily.


At one point during the drive home I recall turning toward Ty and feeling almost blinded by the most magnificent full moon.  So beautiful tonight.  God is always right there.   As exhausting and emotionally draining as it was, today was a very good day.

This photo was taken a few weeks ago, when Ty was strong but showing the first signs of getting sick.  So happy the boys are together again (the whole Toy Story gang is happy Ty's home, too ... oh... and so is Gavin's giant red reindeer - the funniest toy ever).  Isn't Gavin HUGE?  Does Ty have the cutest smile on the planet? 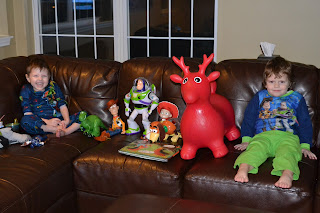