Pulling at the heart strings 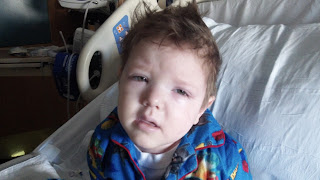 This pretty much says it all.  Ty is not feeling so good and it is pulling at our heart strings.  The good news is that he improved over the last 12 hours.  The bad news is that we will probably be in the hospital for a few more days until we can figure this out and make sure he has the best treatment on board.  That's fine with me and Lou.  We miss Gavin tremendously, but we are also reminded of how lucky we are that we stayed away for so long, and now we just want our brave boy to feel better.  Like I always say... anything but cancer.  Well, almost anything.

There are so many variables that are involved in trying to figure out exactly what is wrong, so I will try to keep the medical details as simple as possible.  So far his blood cultures are negative for any bacterial infection, but it takes a minimum of 72 hours of observation before they can say he is clear of a blood infection.  Ty's nose swab tested positive for a virus - essentially the common cold - but his head and neck pain is too severe to be just that.  His white blood cell count is practically non-existent, meaning he is neutropenic, so we had to stop his daily chemotherapy for now.  Unfortunately, the neurosurgeons have been unsuccessful in getting a sample of his cerebral spinal fluid for cultures so we can't be sure if he has a bacterial or viral infection of the central nervous system (CNS). Given how much back and neck pain he was showing, we suspect it may be related to the swelling of the meninges (aka meningitis) as a result of a bacteria or virus that he may have been exposed to the last time his mediport was accessed - or even when his G-tube was changed on Wednesday.

It isn't likely that Ty contracted an infection that is contagious by general contact, nor is it airborne (so don't worry if you were with him over the past few days).  Ty's CNS is more vulnerable to infection than everyone else because his shunt tubing allows for passage between his skull and the rest of his body.  Microscopic bacteria can travel up the foreign body from his abdomen and penetrate the CSF which is otherwise highly protected from such exposure.  So, a minor bug for you and me could mean a CNS infection for Ty because of this variable.

There is a lot of debate over the shunt - as always.  I will spare you those details for now.  The team has adjusted the setting to see if they can pull off enough fluid for a culture over the next 24 hours, and hopefully that will be the end of the debate.  Of course, if a bacteria is found in his CSF there is always the likelihood that they will want to replace the shunt.  Let's hope not.  No more surgery.  No more shunt revisions.  Ty has already had seven revisions over the past 18 months!!

In the meantime, Ty's fevers are being managed with Tylenol and they aren't spiking too high.  He has some heavy duty antibiotics on board and they already appear to be working.  His pain is being managed with morphine and his attitude - as always - is that of a viking.  Well, a comic viking.  One that likes to tell cute jokes while swinging a spiked club.  Ty likes to keep everyone laughing.  I wish I had a picture to prove that to you, but trust me, he was flashing a lot of smiles today despite all of this.  Thank you so much for your love and support.