...because that's where miracles come from. 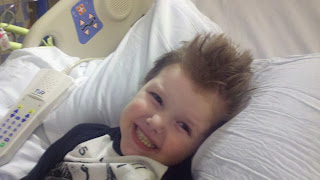 This face.  This face!!  He is remarkable.  Of course there are lots of unpredictable ups and downs during this long stint in the hospital, but Ty continues to charm everyone with his amazing ability to stay positive through all of his hardships.  He just wants to work on his candy house, play board games and watch Max and Ruby.  These little things make him happy.  There is a balloon tied to his bed.  "I wike dat boon, mama," he tells me with a grin.  When I forgot to finish fixing his pillows just right tonight he teased me by saying "Get back to work, mama.  You so slow."

Like I said, of course there is a fair share of challenges, too.  Let's not forget that he is on very high doses of steroids - his "angry medicine" or so he calls it.  Today he got frustrated when he couldn't move his head a certain way.  He argued with me to no end, which in this case turned out to be some decent physical therapy that we tricked him into.  I would tell him that yes, he can move his head, and he would move it back and forth in anger when he said, "no, no, no I can't!"  I can't imagine how hard it must be for him to be so immobilized after coming so far.  Especially now that his right side, his perfect side, has become his weakest.  One thing that makes me sad is when his hands are under the blankets because that is something he never would have allowed before.  When his left arm was weak he used to yell, "my hand, my hand!" if it was ever stuck under the covers because he wanted it free so he could move it around.  Now he's okay with it if his hands are under the blanket.  He even asks me to cover his right hand sometimes.  I let it go for now.

He also got upset today when he tried to eat some of his favorite things.  He had one noodle, one bite of cheese and one mouthful of yogurt - but he cried out and told me that they all "taste like poop."  I never heard him say something like that before, and I've never said anything like that in his presence, so I thought it was kinda funny that he came up with a phrase like that on his own.  Now he keeps telling me that he wants something really yummy, but he doesn't like a single thing I have offered, from candy to ice cream to chicken and bacon.  Nothing.  He's making me a little crazy because I feel like I am on a wild goose chase trying to satisfy his hunger.  In the end, I hope the shake in his G-tube will fill him up and the insatiable, steroid-induced hunger will settle down.

Ty has been sleeping well at night.  He only wakes up maybe once or twice for pain meds.  Yesterday he had a lot of pain toward the end of the day, but today has been really, really good so far.  He generally feels comfortable!  When I exercise his legs, he can hold up his right leg in a bent position for about 5 seconds.  It's such deja-vu!  That was the first sign of hope when his steroid myopathy began to subside around the same time last year.  We used to bend his knees while resting his feet on the bed and have him hold up his legs as long as possible.  I see so much improvement from just days ago.  And he stopped whispering because he recovered his vocal strength.  So much reason to hope for continued improvement.  When I see him lift a finger or pull back his leg an inch I get giddy with excitement.

Tonight the dosing on his steroids will drop down again. There will be an adjustment period where Ty may suffer a bit more until he gets used to the lower dose, but it's important to lower the steroids enough so he can move into another facility and focus on his physical healing.  We hope to transfer by mid-late next week.  I don't know how long Ty will be inpatient at the next facility, but I imagine at least a month or so.  We are also working on arranging daily treatments in a hyperbaric oxygen chamber and we will be making our regular bi-weekly trips to Sloan Kettering for his Avastin infusions and mediport maintenance.  For all of the amazing friends and strangers who shared studies with me on the benefits of Bevacizumab with regard to radiation necrosis, I just wanted to let you know that it is the same drug as Avastin and his doctors are totally on it.  In fact, I think Ty is still with us after this catastrophic setback because he already had Avastin on board (and of course, by the grace of God).

I spent last night with Gavin and returned to the hospital late this afternoon.  What a treat it was!  Not to mention how nice it was to sleep in my own bed and shower in my own bathroom. Gavin is the best little boy in the whole world.  This morning he handed me the phone and told me, "I want to talk" so I dialed the hospital.  "Hewwo, Ty.  I wub you.  I miss you.  Hewwo, Ty."  Then I heard, "Hewwo Daddy.  I wub you."  It was soooo sweet.  He doesn't really understand what's going on, but he gets it enough and he is handling it so well.  I am so grateful for this.  Every time I see him I swear he looks older.  Makes me sad and profoundly proud at the same time.

Thank you all so much for your kind words about the Candy House.  It's such a hit!  :)  We've added a lot of nice new touches today after a visit from the candy cart last night.  The candy cart is a really nice thing that is funded and hosted by volunteers every week.  Little things like this make the kids happy and gives them something to look forward to during such long days in the hospital. 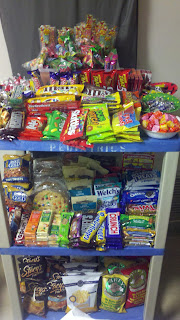 Here's just a quick picture of my latest handiwork.  I've been filling hospital syringes with chocolate frosting to add detail to the stained glass windows.  I also used it to create a vegetable garden in the yard (thanks again, Meghan, for the "Veggie Tales" fruit snacks and to Theresa for the inspiration).  Tomorrow we will be adding some cotton candy trees and potted plants. 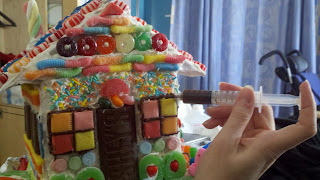