Bedda, but not great

Ty is definitely doing much better, especially now that we're home, but I am so sad over how much this illness is affecting his physical strength.  His left side was getting so incredibly strong just before our hospital stay, and after nine days in bed he has regressed SO MUCH.  It's heartbreaking.  He barely has the strength to stand long enough for me to pull down his pants to go potty.  He can't walk more than a step or two - and that's with my full support.  His left arm is so rigid he doesn't even extend his arm at the elbow and his hand is constantly in a fist.  I swear, we have been taking one step forward and two steps back for so long now, I am starting to lose my mind.  This is my baby.  My best friend.  My whole world.  My everything.  I just want him to have an easier life.  I want to see him scooting on the floor again - soon - I want to see him on his own two feet again.

On the plus side, his scans did not show any swelling or neurological issues so all of this physical weakness should be attributed to the time spent in bed.  His physical therapist came to see him today and she said that he should be able to bounce back very quickly.  He's just not feeling well enough yet to really try.  I hope she's right.

Another huge plus, Ty's headaches have finally subsided.  God, they were so bad just a couple of days ago, I pray he never has to experience such pain again.  I was so utterly helpless I think watching him suffer like that shaved a few more years off of my own life.  It was unbearable. Today he complained only twice and I had to resort to morphine only once - and I tried only a half dose which seemed to work well.

He hasn't vomited since we've been home, and tonight he showed the first signs of having an appetite again (he ate 4 grapes, 3 strawberries and 2 bites of cheese - at least it's something!).  Lou and I decided to take him off the IV fluids because he seems to be drinking enough juice on his own throughout the day, along with whatever shakes I can put through his G-tube.  This is a huge relief because he was getting so swollen and peeing every 20 minutes.  He is still on an IV pump 24 hours a day, though, that I have to change once a day for the next five days.  That's running one of his antibiotics (vancomyacin).  I administer the other antibiotic every 8 hours via his second port and that has been going smoothly.  So, managing his care from home is going very well and he is a much happier boy now that we are comfortable at home. 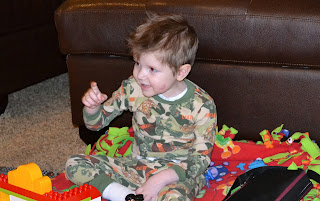 This picture is from tonight and it's the best Ty has looked in days.  It makes me so happy.  The rash on his face has really faded, he is sitting on his blanket on the floor, and even though we had to prop him up with the ottoman to support his back, his posture isn't too hunched over which shows that he is getting some of his core muscle strength back.  Now I just need to get him in a bath and cut his hair!

I don't know if we will ever really know what happened.  If we take Ty off the antibiotics and he ends up with another shunt infection - then we will know for sure that he had a bacterial infection in his CSF that stuck to the shunt.  That would be the worst case scenario, though, so we certainly don't want that kind of validation.  Nothing grew on any of his blood/urine/stool/CSF cultures, but some of those samples weren't sent to the lab until after antibiotics were already on board which means they aren't 100% accurate.  Ty also became neutropenic so we couldn't use the presence of white blood cells as an indicator of infection because his bone marrow wasn't/isn't making any.  Most doctors are deducing that this was a really bad viral infection that just needs to run it's course.  I was happy when they first mentioned a virus because I always think of viruses as 24- or 48-hour bugs, but I was soon corrected and told that they can be far worse than that.  Whatever it is, Ty is over the hump and getting better.  We are giving him his GCSF shots at home to boost his white blood cell count and hopefully he won't be neutropenic anymore when we go into the clinic for his Avastin infusion on Wednesday.  I want to start up his chemotherapy again as soon as possible (it's been on hold as a result of Ty's illness and that frightens me - a lot).  ﻿

Everyone has been so nice to us through all of this.  Thank you, so much, for reaching out every day and checking in on Ty.  Your encouragement and your prayers mean so very much to our entire family.  And thank you, Ginny, for our surprise visit at the hospital!  I brought the beautiful tulips home with me and Ty named the balloon puppies Max and Morris.  The tulips make me smile every day and Gavin and Ty love the balloons.  To everyone who follows Ty's story, I don't know what we would have done without all of your tremendous support.  All of our love to all of you. 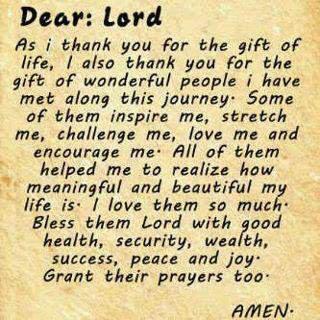