Ty was running a low grade fever this afternoon.  For anyone else, it would have meant Tylenol and maybe the rest of the day in bed.  For a cancer patient in treatment, it means a trip to the hospital.  These are the days I wish we lived closer.

I was so worried about him for a while.  He was just so lethargic which always raises concerns about hydrocephalus or shunt malfunction.  I had tremendous guilt knowing he probably contracted a virus or something on the plane.  I called his team before leaving and asked for permission to give him Tylenol before the ride in because he had been whining and moaning in his sleep non-stop for three hours already.  Although they were reluctant because they wanted to see what he would peak at (at the time he was less than 101), they said it would be okay.  I'm so glad they allowed it, too, because by the time we arrived he was returning to himself again.  His eyes were still glassy and he told the nurse he still felt "yucky" but that he was definitely "feeling bedda".  He hadn't eaten or drank anything all day so they immediately accessed his mediport and put him on fluids.  This requires two huge needles through the skin in his chest - which he does NOT handle well - but all I could think about is how nice it is that he only has to suffer through this procedure an average of once a week now, instead of what he used to endure.  They ran all sorts of cultures (results from which take at least 24 hours) and they checked out his blood counts.

His regular doctor isn't in clinic on Mondays and the one we saw today doesn't check on Ty frequently.  I prefer to only see Ty's primary doctor because I love him and he is familiar with Ty's complicated history, but I still liked today's doctor a lot because he is very thorough.  It can get overbearing, but at the same time I prefer when no stone is left unturned rather than being rushed out the door.  I have had way too many bad experiences when assumptions are made.   The doctor told me that Ty is truly an amazing kid... that he doesn't see many kids like him that can really communicate how they are feeling and converse with the medical team.  Ha!  I would have never thought that Ty gives that impression with the way he usually shuns everyone who tries to talk to him, but hey... I know he's amazing and I'm so glad he does, too.  :)

His CBC was amazing.  Like that of a perfectly healthy kid!  The only thing that indicated a possible infection was the fact that his ANC (his neutrophils - which are the bacteria fighting white blood cells) were very high.  That elevation shows his body was/is fighting something, but the team wasn't too concerned.  They gave him a 24-hour IV antibiotic and we have to return tomorrow for another CBC, another dose of the antibiotic, and for his regularly scheduled infusion of Avastin anyway.  In the meantime, they sent us home on a pump so he basically gets his IV fluids over night without any hassle.  He was feeling so much better after getting those fluids, he even asked me to stop for a corn on the cob at the KFC drive through on the way home.  It's the only thing he ate today, but I'm just so happy he ate.  Whatever the King demands....

Tomorrow will be another long day of back and forth at the hospital.  Due to the fever, I am going to skip YET ANOTHER day of preschool (so disappointed), but at least I can get in and out of there earlier which means I won't have to cancel his occupational therapy in the afternoon.  Hopefully.

Ty is sleeping soundly now, and my fingers are crossed that he can maintain that throughout the night.  I kind-of already know this is out of the question.  When the Tylenol wears off, he will most likely be awake and uncomfortable.  With my luck, those types of things usually occur around the time that I am finally dosing off because of my endless insomnia.  So, perhaps you will hear from me again around 3AM - if he allows me time to go online during Max and Ruby or whatever other Nick Jr. program he chooses to watch.  He probably won't because when he's sick like this he prefers I cradle him on my lap :)  Lucky me, really.  I love him so much, I don't mind our alone time in the middle of the night anyway.  As long as he isn't suffering.

When we left for the hospital I brought my emergency overnight bag and expected I would need it 100%.  In fact, I cried a bit because I was afraid we would be spending our second Thanksgiving there in a row.  When I quickly searched through the essentials I was happy to see that it still had a few mini bottles of wine left in there, though ;)  Of course, I was even more happy that I didn't end up needing to use it.  I can't remember if that has ever happened before.  If I was prepared to stay inpatient but then I didn't have to.  Oh, how things are changing slowly but surely.  Thank you, God.  And thank you, everyone, for keeping tabs on our special boy.  He is such a love. 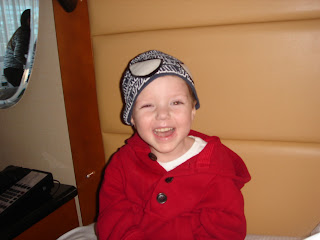