Healing rainbows for all of us.

Ty's bloodwork showed that his counts were still dropping as of Friday.  We cut his daily chemo dose by another 25% (this is the second week in a row we lowered his chemo) and he was so happy I thought he must be bouncing back.  Unfortunately, his bloodwork today showed his white blood cell count to be dangerously low.  We are down to an ANC of 0.2 from 0.6 (for those who are familiar with the term) and we are going to have to stop the chemotherapy altogether for a while.  I will also have to begin giving Ty his "G" shot every day starting tomorrow.  This was definitely unexpected, but for me it only verifies that we made the right choice by beginning this metronomic chemotherapy regimen instead of traditional chemo because Ty's bone marrow just isn't strong enough for all of these toxins.

His spirits are so great, you would never know that he is neutropenic.  He has always been that way.  I remember the first time I brought him to the emergency room for a fever after his first course of chemo... the doctor was completely shocked when his bloodwork showed he was neutropenic because in the middle of the night he was up playing games and charming the socks off of everyone with his smile.  He is very good at that :)

So, we have been buried in snow and without power since Saturday afternoon.  After three freezing nights in a row, our freezer was defrosted as of this morning and we were told by the electric company that our power lines weren't expected to be fixed until Wednesday at 11:30PM!!  So, I packed up Ty and Gavin and drove to my mom's house with bags full of laundry and a cooler full of my best perishables.  Of course, I got a text message just two hours after we finally got here to tell me that our power was restored.  We are going to stay the night, anyway, because Ty was having so much fun with Grandma and Pop-pop.   Besides, with Ty being neutropenic there isn't much more we can do, anyway. 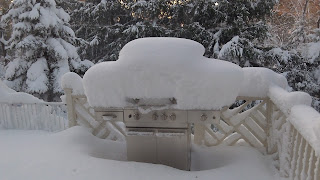 Halloween in our new neighborhood was totally cool.  Despite the snow, we had tons of trick-or-treaters, and I think Ty had more fun giving out treats than he did getting them for himself!  He waited by the window when the sun went down, and told us to "run" to the door with our flashlights so he could see all of the great costumes and hand out candy.  Gavin was just as excited.  It was adorable.  Ty went as Iron Man (because Iron Man has a "mediport" in his chest just like Ty does) and Gavin was Wolverine.  Is it terrible that I convinced Gavin that Wolverine would be cooler than Buzz Lightyear because I wanted him to match his brother?  I wanted them to have the same "Super Hero Squad" theme :)  I don't think he was upset about it, just look at him showing off his claws. 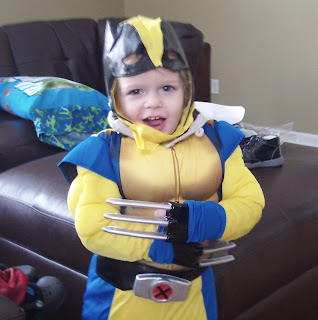 As promised, Ty stood on his own two feet for a photo this Halloween!  He was supported by the couch, but still!!!  How amazing!!!!  The real superhero. 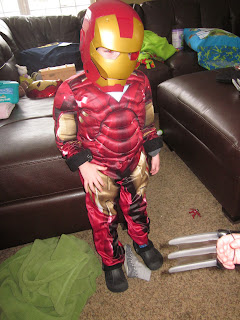 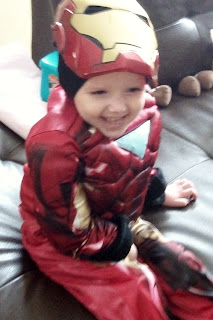 What a year, what a year.  Our Ty is one amazing little boy.  He has been through so much and we are finally coming full circle.  I am just so anxious for the day that we can declare him cancer free.  His MRI on November 8th is right around the corner and I just can't stop thinking about it.  With every bone in my body and every ounce of my soul I truly believe that this scan will remain clear, but it is only natural that I am still sick with worry. Luckily we have the marathon and Lou's 40th birthday coming up on Sunday to keep us distracted.

I received an email from a college friend recently that helped me a lot. I couldn't figure out why I have been feeling so vulnerable lately.  Why I feel like I could fall apart at any given moment, just as everything else is finally coming together.  She reminded me that up until August, I have been living in pure survival mode.  That I was in overdrive, with a daily stress level that human beings aren't really capable of enduring before it will eventually take its toll.  Now that my day-to-day concerns are less critical, I am starting to feel the effects of all that pent up stress and emotion.  She was totally right.  I have been feigning confidence when in reality, I feel weak and broken.  But, it's all good!  It's very good.  She was right when she said I am "detoxing" and it is necessary.  That's exactly how I feel - like the pain that built up over the past year is working its way out my pores.  I'm happy to be going through this phase because it's certainly better than the alternative.

My friend Colleen says that she pictures Ty wrapped in a real rainbow with the glowing spectrum of colors healing him completely.  I like that very much. I like to think that I am wrapped in a healing rainbow, too.  So warm and comfy.  Goodnight everyone.  All of our love.