Today, Ty went to his first NFL football game.  The Jets, of course!  What a way to end this incredible weekend.  We have more and more to be grateful for with every passing day.  Today was a day that will live in our memories forever. MetLife (as in, MetLife Stadium!!) awarded Ty complimentary tickets to the game. Little did we know what incredibly special arrangements the company had made for us. We had the time of our lives.

In fact, a great friend and past NYC roommate of mine recently joked that Ty is going to have to "get over himself... we get it... he's great..."  Shep, you are right.  I pray that some day I'll have a hard time explaining to Ty that this is not normal and should not be expected.  :)

Here he is, once again, being a super little badass psuedo-celebrity. 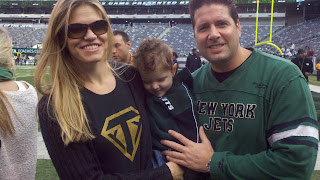 First, MetLife provided us with passes to stand on the sidelines pre-game.  When we picked up the tickets we didn't actually think our feet would be touching the same turf that the JETS play on... but indeed it was!  Defensive players Marcus Dixon, Sione Puoja and David Harris came over to talk with Ty during their warm-ups.  So did Defensive Assistant coach Jeff Weeks (what a nice guy) - he said "let's see if we can win one for this little guy."  Which, by the way, they did!  It was a nailbiter, but the Jets won!

Personally, I was eyeing Mark Sanchez the entire time (what can I say?) but he was too busy warming up for the big game.

However, my sister-in-law's favorite Jets veteran, Wayne Chrebet also stopped by to talk with us.  Wow, was he the most thoughtful man - and so cute.  Before the Jets, he had played for Hofstra University on Long Island so of course I was smitten, too.  He asked a lot of questions about Ty because he is an advocate for pediatric neuro-disorders.  He was so thoughtful and kind.  Here he is talking with Lou.  He might be the ONLY football player we saw in person who didn't absolutely TOWER over us. 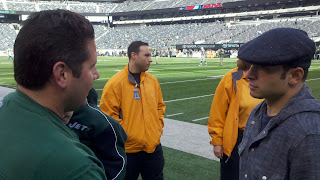 Once the game began, we were treated to amazing seats at the 50-yard line and full access to the coaches club.  It was outrageous.  There was tons of food, and there was even a candy bar that had everything Ty could ever ask for.  It completely made his day.  Here he is with a selection of the candy he was eating (smarties and gummy bears). 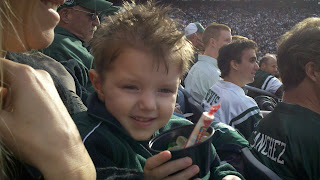 Since he is only four years old, I often worry about whether or not he is going to have a break down and start whining to "go home."  To my surprise, he enjoyed every minute and watched the entire game.  And it was a really, really good game.  We all enjoyed it without any major issues.  At one point I had to take him for a walk around the stadium, but I didn't care because I was happy to see the new stadium (I haven't been to a game in over five years).  It is so nice.  Very different from the old stadium I remember. 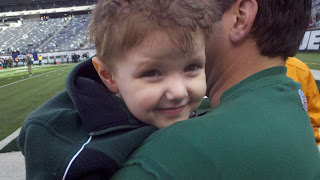 Ty has been through so much.  I cherish moments like these when he gets to feel special.  He is our most precious gift.  I try to enjoy every single moment; every sound and every breath that comes out of his mouth.  Oh, and could the weather have been more perfect?  I don't think that was coincidence or luck, either.

Thank you to everyone who helped make this day so special for Ty (Catherine - I love you so much).  Goodnight everyone.  I hope you had a wonderful holiday weekend filled with blessings.
Posted by Cindy Campbell at 9:47 PM