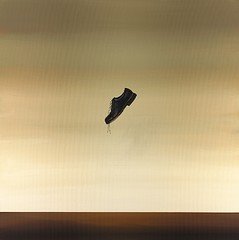 My friends have been worried about me. I guess my posts lately have been a little weary and I sound fatigued.  These peaks and valleys are to be expected after all we've been through.  It can be hard to avoid living in limbo and waiting for the other shoe to drop.  Well, to quote my friend Linda, "F--- the other shoe!"

She's right!  There will be no other shoe dropping.  I am totally inspired to turn my attitude around.  Even at four in the morning I feel really good despite the fact that it's often these middle of the night ramblings that tend to bring out my worst fears.  Of course, the fact that I am wide awake at four in the morning is another issue that I will have to conquer at some point, but for now I can be friends with my insomnia.  I should try to use this time to accomplish some long overdue tasks, or just some mindless online shopping to clear my head ;)  Ty had such a great day today, I am looking forward to tomorrow.

In fact, I just saw an email from another friend who stopped by the house today and she said that Ty looked better than she has ever seen him (and she has seen it all... the good, the bad and the ugly over the past year).  Better than ever!  She's totally right, too.  He is a superstar.

He is still coughing a bit so I decided to put off his bloodwork until tomorrow.  He also felt a little nauseous this evening after I gave him a shake through his G-tube to try and help his digestion (I guess I only made it worse).  Otherwise, he is happy as can be and he even had a decent appetite today!  He was eating chicken for the first time in weeks.  That and Welch's fruit snacks. Better than nothing, I'll take it!  He also had an amazing workout with his physical therapist this morning.  He is really gaining confidence on his feet and she was so impressed.

I was looking at his bare legs tonight when he was changing into pajamas and I swear there is some meat sticking to those bones.  Finally!  The scale has been saying otherwise, but I can tell that he is gaining a lot of muscle.  It allows me to worry less about whether or not he is eating enough when I see him gaining weight.  You will all hear me singing from my rooftop when he finally reaches 13 kilos.  That's how much he weighed the very first day that we checked into the emergency department at Cohen's Children's Hospital because our baby wasn't sleeping well.  Right now Ty weighs 12.1 kilos (which is about 26.5 pounds).  In May and June he weighed as little as 10 kilos (22 pounds).  Now... I know I can easily gain five pounds in a week, let alone three months, but for Ty that is a really big deal :)

The other day I hung a growth chart in the boys' room.  It was the same one we used in our Long Beach house, I just neglected to hang it ever since we moved.  I was a little discouraged when I stood Ty against the chart because he hasn't grown at all since last September, but some of that can probably be attributed to his core muscle weakness and the fact that he doesn't stand as tall.  Gavin, on the other hand, is impressive :)  He is exactly 2 and a half years old, he is slightly taller than Ty and weighs a whopping 37 pounds.  People ask me if Gavin is Ty's older brother.  Ha!  Lou and I both envision Gavin as a tough kid in school who will stand up for Ty if there are ever any problems.  Ty is such a funny and charming little boy that I can't imagine him having a tough time, though.  I guess you never know, kids can be cruel, but Ty always made fast friends and I think he has a fun-filled life ahead of him.  He deserves it.

Goodnight all.  Here's to a fun-filled life full of rainbows and sunshine!!!!

Posted by Cindy Campbell at 4:34 AM