Ty and Gavin went to see Max and Ruby at the Mid-Hudson Civic Center this weekend.  For those of you who don't have small children, Max and Ruby is a cartoon on Nick Jr. that is very popular among preschoolers.  It is Ty's absolute favorite, and we watch it over and over and over. I wasn't able to go, but Lou was there and he told me that it may have been the most excited he has EVER seen Ty - maybe even more than when he saw the Yankees; of course, that's just because he's so young and he doesn't know any better ;)  In the meantime, I had the best time on Long Island with my favorite girls.  I was there for my cousin's baby shower and stayed late to hang out with some of my oldest, bestest friends.  I can't tell you how liberating it was to be out all by myself.  It was the best thing I've done for myself since Ty got sick.  My friends are my best therapists :)

Thanks to the amazing PR folks at Max and Ruby (they saw his story in the Poughkeepsie Journal that stated he was a big fan) and the President of the Civic Center who reached out to us this summer - SuperTy and Gavin were given front row tickets and got to meet Max and Ruby in person before the show.  Lou tells me Ty was clapping, dancing and singing along like it was the best day of his life.  I am so happy for him. 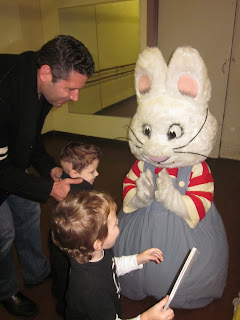 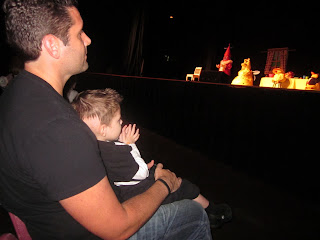 Today marked 21 days that Ty has been taking Etoposide (chemotherapy) orally twice a day - among many other meds.  His red and white blood cell counts, and his platelets, decreased slowly over the past three weeks but he never became neutropenic which is terrific - he is borderline right now.  The meds this time around have been pretty good to him!  Other than increased fatigue and weakness combined with his ongoing lack of appetite, Ty has been a happy, playful little boy.  I swear, he smiles more than anyone I know and he just loves to joke around.  He never fails to amaze me.

Tomorrow begins another new cycle.  We will be switching out the Etoposide for Cyclophosphamide (a different oral chemo) and we are adding Accutane.  Anyone who knows this drug for its qualities to treat acne might be confused - and so am I to be honest.  After talking to my doctor a dozen times and reading up on all of the biochemistry specifics, all I can tell you is that Retinol controls cell differentiation and cell death during embryonic development so it is believed to encourage cell death if a genetic/cancer mutation occurs.  It is the accepted protocol for treatment among neuroblastoma patients when they are in remission (another terribly aggressive cancer in the central nervous system that is common among small children) and the results are promising.  This is all quite experimental.  There are no studies or examples of children that are the same as Ty, but so far we are so happy with how he is tolerating his therapy.

We are told that the Cyclophosphamide will knock Ty out more that the previous chemos he has taken orally.  I hope it isn't too bad, because he is doing really well and I hate to see any of his miraculous upward progress put on hold.  I still plan on taking him to preschool this week until he gets his bloodwork again later this week.  Fingers crossed for some relatively smooth sailing.   Just the thought or any additional suffering for Ty makes my heart hurt, so I pray Ty can tolerate this new regimen as well as he has the previous two.

Thank you all so much for praying for our superhero, following his story, spreading awareness, and for all of your thoughtful notes, emails, gifts and random acts of kindness toward my family.  We are so blessed and forever grateful.  All of our love to you all.
Posted by Cindy Campbell at 10:35 PM