Yes, that's right.  We are back in the hospital with Ty.  I haven't been able to update my posts because things became really difficult at home over the past few days.  Early this week, Ty's condition started worsening.  He was getting more and more sleepy, his speech was getting worse and he was increasingly weak.  His breathing began to sound labored on Thursday and by last night we were on the phone with his neurology team discussing whether or not we needed to rush to the hospital again.  Instead, it was suggested that we try to increase his steroid at home, see how he does.  Lou and I saw little improvement, so we knew we would have to come in.
I was stalling all day today, we didn't even leave until 3PM and you should have seen how long it took me to pack our bags.  On one hand, I was a nervous wreck over his condition and wanted desperately to be in a place where I know they can address any urgent medical issues, but on the other hand I have been so upset seeing my baby like this and so scared of the unknown that lies ahead that I have been reluctant to face this reality.  At least while we are home I can be positive and hope that he improves with each passing day.  Here at the hospital I know he will be faced with a number of blood draws, imaging under anesthesia, endless exams from countless doctors, flashlights in the eyes every 20 minutes… followed by the serious discussions with his doctors about risk versus benefits and what our next steps should be.
Will Ty be in surgery a couple of days from now?  Maybe.  Will Ty be in the hospital for weeks?  Months?  Will they advise us to do nothing at all at this point??  I can't bear the thought.
Ty showed us that he was facing similar anxiety over coming back to the hospital.  He kept saying he didn't have to go the hospital, that he was feeling better, even though he could barely keep his eyes open or get the words out.  When we pulled up to the hospital he said he wants to watch a movie when we get home.  Lou and I could barely hold it together to tell him that we were going to have to stay over for a few nights.
Ty's medical condition is still so complicated.  His new shunt is said to be working properly, but his CT scan from this evening shows that his ventricles are still very enlarged - in fact slightly larger than his last scan.  That means he is still suffering from hydrocephalus.  His scan also shows that his tumor is - for the most part - stable, which doesn't explain why his condition would be worsening.  Lastly, they drew some CSF fluid for cultures and we are told that the stain is already coming back "gram positive".  This means he likely has another infection in his cerebral spinal fluid.  Unbelievable.  Really.  He's been on antibiotics since January 18th, how does that even happen!!  My poor baby.  He is so amazing, I don't think I would be able to do what he does and still have a smile on my face like he does.
At least he is sleeping peacefully.  I wish Lou and I could do the same.  He is an angel. 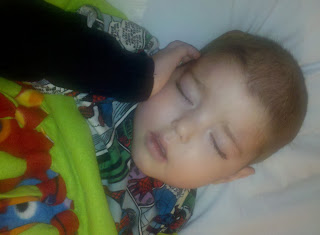