I used to play Candyland a lot. My son Ty was diagnosed with a brain tumor when he was 2 and having spent more than 250 nights in a hospital with a toddler (who loved candy, especially blue lollipops), you can imagine it was among his favorite games to pass the time. His favorite color was blue, my other son's favorite color(s) at the time were red and green (yes, both), so I always had to be the "yellow guy."

I since decided that my favorite color is yellow. It's not a popular choice among kids, and I get questioned about it often.

What's your favorite color?
Yellow.
Yellow? Really? Why?
Because it's a happy color...

The irony lies within the fact that for me, as a bereaved mom, every ounce of happiness I feel is forever bittersweet, juxtaposed by my loss.

Yellow is a happy color. The color of sunshine. In a time when I most needed hope and happiness, yellow could not have been a more perfect color to designate as my favorite. The Coldplay song, Yellow, became our love song.

I met Matt and Nicole just months after Ty died. Their daughter - Sweet Sally Sunshine - had been recently diagnosed with infant leukemia. I drank waaayy too much wine that night, and shared my "fuck the world" sadness with them quite inappropriately (probably to their horror), but I would never know. They were and are the kindest, warmest, most optimistic people imaginable. Nicole has the most beautiful smile you'll ever see.  From the moment I met them, I admired them tremendously.

Over the course of the year (~2013), after several ups and downs, Sally was thankfully cancer-free. Matt and Nicole could have eventually put the ugly and unbearable world of childhood cancer behind them, but instead they chose to advocate for the children. They were the largest force behind the movement to convince the Empire State Building to go gold to raise awareness for childhood cancer, and when the Empire State Building refused, they gave a provoking speech in Times Square as its lights went gold in September to prove that even greater things can come out of such disappointment.

Sally and her family brought our community together in a united mission to raise awareness.

Sadly, cancer wouldn't let them go on with their lives, even if they wanted to. Sally suffered tremendous setbacks over the years, and on Wednesday she died suddenly after becoming septic from an unknown infection. She had just celebrated her sixth birthday.

Cancer will not be listed as her cause of death. She is considered a cancer survivor. Statistically, when measuring the impact of childhood cancer, she will be deemed a success story. But the world lost this beautiful girl because of childhood cancer. Because the treatment she endured at such a young age weakened her little, growing body. The growing list of long-term side effects from the treatments that temporarily saved her life included seizures, low oxygen and a weak immune system. Like my own son who suffered necrosis and the onset of paralysis despite the fact that he was cancer free, Sally's quality of life was compromised.

Sally's story is the reason why we fight so hard to provide funding for safer, more effective treatment options for children. Why I'll never stop fundraising and fighting and talking about kids with cancer.

Over the years, Sally's sunshine remained bright, no matter what she was faced with. When you were in her presence, you could literally feel her light. Sally made people happy.  She was yellow. 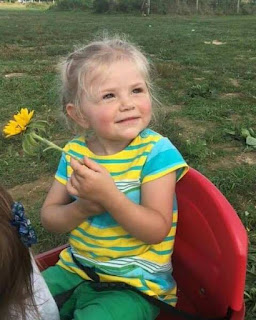 Sally's family has asked that we wear yellow today to honor their amazing girl. It may be my favorite color, but that doesn't mean it works with my complexion so I didn't have much to choose from. I think this is a happy shirt, and I am smiling with tears in my eyes as I take this photo to show Sally's family how loved she is.

With every ray of light, Sweet Sally Sunshine will be remembered. 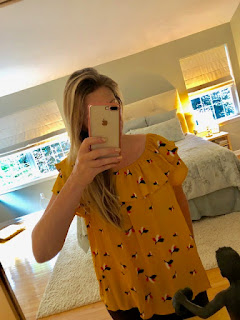 Posted by Cindy Campbell at 9:51 AM