I wrote my first blog about childhood cancer awareness month in 2011. My son was diagnosed with brain cancer in August of 2010, but it wasn’t until after I saw them taking down some of the “awareness” signs from the playroom at Memorial Sloan Kettering that I learned about September. I didn’t know that gold ribbons were for childhood cancer. I didn’t know that September was “our” awareness month, and I was thrilled and humbled when President Obama signed a proclamation making it official in 2012.

I always thought gold was such a perfect color to represent youth, but the dual meaning of “nothing gold can stay” from the Robert Frost poem haunted me immediately. The beauty and newness of “gold” is usurped by unstoppable aging, and there is an underling message of natural progression and eventual death that was my worst nightmare. I understood that “nothing gold can stay” but wondered about just how numbered our days/his days might be. 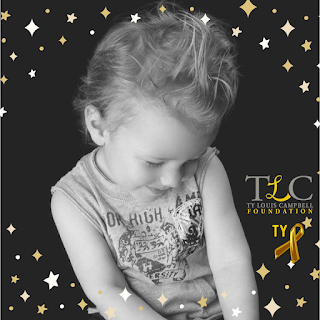 So, September 2012 was the first “official” childhood cancer awareness month. It was also the month we took my son home on hospice care. In September 2012 I saw my son live out the rest of his days on my couch in the family room, adorned with more comfy blankies and surrounded by more toys than a child could dream of. But his real dream would never be realized. His dream of jumping in muddy puddles, his dream of being cured, his dream of feeling “bedda.” Instead, with every passing day he felt worse. With every passing day, hour, minute, I lived knowing that it was one less day, hour, minute I would have with him. He was dying. He was four years old, and I was holding onto hope that maybe he would get through September to turn five on October 4th.

I made the very unreasonable decision that I was going to throw him a carnival party. I bought so much crap from Oriental trading company and had a vision of blocking off my entire street to have kids flood it like a block party - complete with men on stilts and elaborate inflatables. There was a movie called “My Life” where actor Michael Keating was dying of cancer, and his wife (Nicole Kidman) throws him a similar birthday party in his backyard. It’s such an emotional scene from the movie, and I couldn’t help but reflect on it as I planned for Ty’s carnival. The whole time, I guess I knew it was never gonna happen. I just didn’t want to believe it. Instead we buried him with a stack of carnival tickets in his hands, given to us by our friend Rachel.

I planned to write something very different. Something more about the awareness and the ACTION that we need to take against childhood cancer. But I started typing and my mind went elsewhere. The truth is… there are thousands of blogs, social media posts and essays written by parents like me who want to raise awareness for childhood cancer – and they all sound exactly like the posts that I’ve written in 2011, and 2013, and 2014, and 2015 and 2016 and so on. It’s exhausting! If you want to read my favorite one about childhood cancer, please visit my post from last year. It was most informative.

And if you want to DO SOMETHING, read about our TLC September initiative where all fundraising efforts in September will ensure that 100% of donated dollars support the TLC for Families program and are paid out to families in Houston who are displaced by Hurricane Harvey and who also have a child in treatment.

So, I guess my “awareness” post today is just to make everyone “aware” that it still hurts. That it will never ever be okay. That grief doesn’t go away and time doesn’t heal. Insert great quote here about waves and scars and blah blah blah. I’ve read and agree with them all.

I will never recover from losing my son. The intensity of my grief is forever commensurate with my boundless love for him. I hope that the intensity of my anger, on the other hand, will subside when the research teams, regulators, biotechs and pharmaceuticals stop dragging their feet and make new treatments available to more children FASTER. My son died because there wasn’t an effective treatment available to cure him, and I know with complete confidence that there could have been. All of this incredible science…. these amazing discoveries.. the truly brilliant minds that take my breath away… but where is the progress? If all of it was taking place twice as fast, with twice as many people focused on it instead of parents selling lemonade and riding bikes across the country to raise money for research, maybe it would have happened fast enough to save my son. (Important note: if you believe the cure exists and the government is hiding it from us, or if you think cannabis alone, Jesus, seaweed in a bottle or herbs could have saved him - you don’t understand the kind of cancer we were dealing with, the genomics, the rate of progression, etc. and I beg you to keep your thoughts to yourself).

I can’t wait until all of these “Fuck Cancer” cries are heard with the implementation of real, curative treatment protocols that truly fuck cancer up in every direction. I can’t wait until September rolls around and I don’t have to contemplate writing a blog about “knowing the facts” and “taking action against childhood cancer.” Like I said, I am exhausted. I talk about cancer all day every day, I fall in love with more and more kids on a daily basis, and I continue to hear bad news every week. I want to be bored in September. I want to focus on foliage and falling leaves and geek out on the apple picking and corn mazes around the corner. I want to shop for impractical fall jackets that are worn once per season, not gold ribbons and gold shoelaces and t-shirts adorned with my son's face on it to get the message across.

I am sitting in the doctor’s office as I write this blog, and the song “You’ll be in my heart,” is playing. That was Mely's song for Ty and I can’t stop the tears from flowing like a river. Everyone is so politely pretending not to notice, but it’s so obvious. Mely got married over the weekend. She sent me this photo of her bouquet - with the locket we gave her just before she left us in 2013. Forever our family. She kissed Ty’s face a thousand times after he died and we cremated him with her tears soaked into his skin. She is the most giving, loving person I know, and I hope she has an incredible life filled with love and happiness. My Mely deserves nothing but the best. Ty will be watching over her for an eternity. 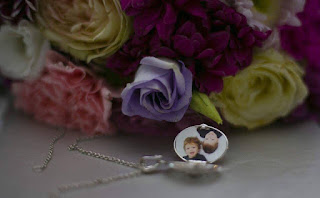 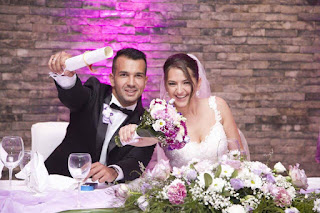 Thank you for still caring and reading and sharing Ty’s story. Even when my writing is so filled with sadness, I am grateful for your listening ears and kind hearts.
Posted by Cindy Campbell at 10:57 PM