The Birth of Bodhi

Bodhi (pronounced BO-dee).  A Sanskrit name meaning “Awakened” or “Enlightenment.”  The Buddhist concept for Bodhi is spiritual awakening and freedom from the cycle of life.  Bodhi is also the name of the sacred tree under which Buddha sat and obtained his enlightenment/nirvana.

We had trouble agreeing on a name for our baby boy for the longest time.  Then, after he was born, Bodhi just seemed to suit him perfectly.  Lou and I have been through our own spiritual enlightenment on so many levels, it just sounded right.

Everyone wants this story to be beautiful.  A light at the end of the tunnel.  The rainbow after the storm.  Sadly, the birth of Bodhi was much heavier than it was happy.  It was more painful than I ever imagined.  And it has taken me 2 months to share this truth openly and honestly.

Physically, I was okay.  It is the emotional pain that has been so unbearable.  Now, eight weeks later, I can finally say I have recovered from the deep sadness that has weighed on me ever since this little soul was born.  I can finally see him for who he is, without searching for something more.

Upon checking into the hospital early that morning, I was so lucky to walk into a very quiet maternity ward, greeted with friendly smiles, and escorted to my serene corner room where I would deliver the baby that my heart yearned for over the years.  The girl checking me in recognized my name, and we shared tears over Ty. Then my nurse came in and said she followed Ty’s story for years, and she would take the very best care of me.  I wasn’t even surprised that my angel would have arranged this for me.

“This is going to be perfect.” I thought, almost as if to convince myself, but I was already feeling like everything was all wrong.  It was wrong because this wasn’t supposed to be my life.  Nothing felt the same as it did when I was in labor with Ty and Gavin, and the flashbacks began rolling in.   With every contraction I couldn’t help but think “this is nothing compared to what Ty experienced.”  I re-lived seeing him in his hospital bed after so many painful surgeries, when he was suffering with MRSA meningitis, when he would tell me his head hurt, or his mouth “not work.”

When Gavin was born labor was fast and intense. I was certain labor would be even faster the third time around so I didn’t hesitate to call for the epidural.  This time, however, labor was slow and steady.  Uncontrollable tears rolled down my face as my legs went numb because I couldn’t stop wondering… “Is this what it felt like for Ty when his arm suddenly slipped from around my neck that night?” In an instant, my four-year-old super hero lost his ability to walk and could barely move his arms or hold up his head.  How did that feel for him?  What was going through his mind when all of a sudden he was robbed of these most simple movements that most of us take for granted.  I couldn’t walk and my legs felt so unbearably heavy - but for me it was only temporary.  How unfair it was to think my son endured this feeling of helplessness for six months until he died.

I tried to get comfortable in my hospital bed and wondered if Ty could feel me when I used to lay down beside him among the countless wires post-surgery.   Each time I winced in pain, I was ashamed of myself, knowing that the labor pains I was experiencing didn’t compare – not even close – to what my young son endured for 2 and-a-half years with such bravery.  These are the memories I try not to think of, but being in the hospital made it impossible to avoid.  Every procedure.  Every time his skull was opened.  Every infection.  His cries when the head pain would come and go with waves of intense pressure.  These are the thoughts that consumed my day.  I was unable to focus on the new life that was being brought into this world.  I could only think of the loss.

Bodhi was born in the late afternoon, and I was immediately in awe of him.  I felt so light, it was almost as if it wasn’t really happening.  My first thought was that he looked so much like Gavin, but with more hair.  I looked for Ty in his face without finding much resemblance beyond a hint here and there.  Bodhi was placed on my chest and I could barely believe it.  A new soul.  A baby!  What a beautiful life I want for him.

Over the course of the next few days, so many people came in and out of my room.  They had a lot of advice on caring for the baby, getting comfortable at the hospital,  and making sure everything the baby is exposed to is clean and sanitary (I had a kid with cancer, believe me, I get it).  None of them realized just how experienced I am with hospitals.  Nor could they imagine just how hard it was for me to be a patient there.

Coming home I found myself even more weepy.  It’s so unfair that women go through all the pain of labor and what it does to your body, only to go home with such heightened hormones that can truly make you feel insane.  Why can’t they be happy hormones?  Couple that with the intense grief I was suffering and a newborn that cries constantly… that’s where I was at for the first six weeks.  I was an absolute wreck. We are just now finding our groove and falling in love.

There, I said it.  We did not have a fairytale “birth story.”  Bodhi was a screamer, and it made me want to pull my hair out.  I felt fat, ugly, old, and incapable.  And it took a lot longer than I expected before I started feeling better.  I’m relieved to say that I am better now.  That this beautiful baby boy has blessed our home with new energy and excitement.  Gavin is the best big brother, too.  He’s so proud and so helpful.  I just love watching them together.

How I wish Ty was here, but I know he is watching over his brothers every second of every day.  There was a ladybug crawling on my window at the hospital – the first of many signs that he was there all along.  It’s not the same, and it will never be okay, but I am coping with this reality and I do know I am blessed.

Be sweet, Bodhi.  This is only the beginning.
Merry Everything to Everyone. 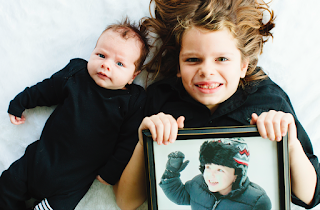