I spent the weekend cleaning out the closets with Lou.  And the toy chests.  Every time it gets a bit easier as I find less and less of Ty’s things. It’s natural for a home to transition from baby toys, to big kid toys, to teenager “stuff.”  But when the traces of a life lost slowly disappear from existence, it is painful on a level that I can’t put into words.

This year, I am giving away a silly toy where you blow into a pipe and try to balance a little foam ball as it floats above.  Aunt Debi bought it for Ty while he was in the hospital.  It was great for his therapy, but he never quite recovered the strength to get the ball in the air.  It was time to let it go.  I was consumed with guilt as I watched my hand open and the object drop into a garbage bag.  It feels as if I’m throwing away another memory, but at the same time I know I can’t keep everything (unless we're talking about a decomposing cake - that I can keep forever).

This year, Spring Cleaning had new meaning.  Lou and I are expecting a new baby in October, so we had to consider keeping some of the items that would have otherwise been disposed of.  It was so strange to imagine we should hold onto those car seats, and the toy kitchen.  Surreal, really.  I know, many of you are probably shocked reading this.  I never really talked about having another baby… I think because I never truly believed it would happen for us, and it made me feel vulnerable.

Cancer didn’t just rob Ty of his childhood (and his adulthood, and everything in between).  It robbed our entire family of what we were supposed to be.  I wanted to have at least one more baby after Gavin.  A girl (of course) and the three of them would grow up being the best of friends.  When Ty was sick I often cried to Lou about how cancer was threatening us with Ty’s life, and also stealing our opportunity to add a new life to our family.  We needed to be 100% there for our son, and a baby was an impossible thought.

After we lost him, my thoughts about getting pregnant were so terribly inconsistent.  On one hand, I shuddered at the thought – as if a new baby would be a futile effort to replace the irreplaceable.  On the other hand – I was in a panic because so much time had passed, I was so much older than I wanted to be if I was going to get pregnant, and my ovaries were shouting “tick-tock” when I tried to sleep at night.  I worried that if something happened to me and Lou, Gavin would be alone in life.

A couple of years ago, Lou and I agreed that maybe a baby would be a good idea.  Maybe it would bring some light and happiness back into our home.  We tried to get pregnant, but it didn’t happen.  I was shocked and angry because I never had any trouble getting pregnant before.  Why?  Why when I’m already in so much pain do I have to suffer another monthly reminder of how terribly wrong my life turned out.

I spoke to a doctor about the trouble we were having and he had lots of suggestions.  None of which felt right.  Lou and I decided that after all we’ve been through, we didn’t want to take any measures to make it happen.  If it was meant to be, it was meant to be.  And when I turned 40 in October, I truly started to accept that it wasn’t.  In January my best friend treated me to a girl’s weekend in Puerto Rico where I shared my acceptance of this fact, and she insisted – poolside with a cocktail in hand – that I would get pregnant.  That I was being ridiculous for talking like that and together we laughed and decided that if I did have a baby it would be a little girl (obviously) and I would name her Faith.

Turns out, when you give up on getting pregnant, accept your life as it is, and start planning for a different future, that’s when life likes to get interesting again. I got pregnant soon after that trip and I am going to have a baby in October.  Just when I got truly comfortable with the fact that Gavin can take his own showers, wipe his own butt (sometimes), fold clothes (sort-of) and clean his room.

Sorry we didn’t tell anyone sooner.  But I’m 40, and the statistics on things going wrong at this “advanced maternal age” are frightening.  After all we’ve been through, I needed to get the results from multiple screening tests and blood work before I was convinced everything is going to be okay.  The benefit of all this advance screening for old ladies like me is that we also get to find out the sex of the baby early-on and guess what?.... it’s a boy.  I’ll share my thoughts on that in a few days because I need time to spill the mix of emotions I have over that fact.

This morning I caught the early train.  I stopped by the bakery just as they were opening for a coffee and a warm, sticky, fruit and cheese Danish.  I got settled on the last car, opened the bag, and just as I was getting it on with that delicious morsel, I felt him move.

It’s real.  This finally feels like it’s really happening!  And I guess he loves a warm danish as much as I do!

Just like that, I traded in my vision of pigtails and sundresses for my new morning date at the bakery.  He will hold my hand and point his little chubby fingers to his favorite cookies behind the glass, and I will buy him anything and everything he wants :) 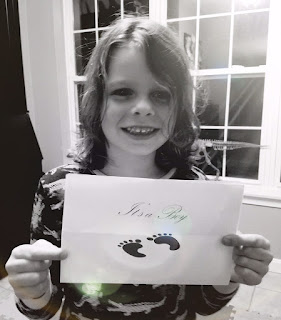 When we moved into our house, there was an old refrigerator in the basement.  They don’t make ‘em like they used to, because this thing looks like it’s 100 years old and it still works without any problems.  It's on the same floor where we walk out into the backyard, so naturally it became the “beer fridge.”

On Ty’s last birthday with us, so many people did so many incredible things to make him smile.  In fact, we enjoyed “SuperTy” cupcakes from a local baker, a 3-tiered SuperHero cake with all of his beloved characters, and his favorite of all… a Max and Ruby Cake with a carnival theme.  It was one of his favorite episodes, and he often talked about going to the carnival.  In fact, he was laid to rest with his favorite Max and Ruby DVD and carnival tickets in his hand. 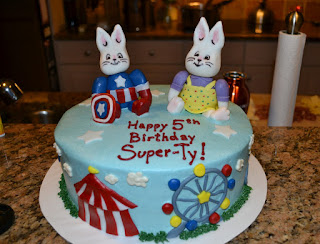 He died 13 days after we helped him blow out those candles.  It’s still impossible to believe.  No matter how quickly life goes on, how often I find myself smiling again, and how much I have accepted that he is never coming back, the unbearable weight of his absence will ALWAYS remain.

So if you find yourself enjoying a laugh amongst friends in my backyard and someone sends you to the beer fridge for another round, please disregard the birthday cake on the top shelf.  Although the fondant Max and Ruby haven’t aged a bit… 3 and a half years have taken quite a toll on the rest of the cake that was once vanilla (I think) with cannoli filling.  I can’t recall because only one slice is taken from it.  I imagine we didn’t have much of an appetite those days.

It’s totally weird.  I know this.  In fact, sometimes I laugh at the cake whenever I am caught off-guard by its presence.  But for some reason, I leave it.  Lou leaves it.  We rarely talk about it… the cake simply remains where we last placed it on October 4, 2012.   Ty’s fifth and last birthday.

I was prompted to write about this today because when I was rushing off to work I noticed Gavin’s leftover mac and cheese in the backseat of my car.  Ugh.  Since it was 30 degrees all night and my car was covered in frost (unbelievable), I figured I should quickly throw it in the fridge.  In my haste to catch the train I opted for the beer fridge.  The cake, of course, caught my eye.

On my way back to the car I thought to myself… “It’s time, isn’t it?  I should just do it.  Pick it up, walk it to the garbage can, drop it in and don’t look back.”

But to tell you the truth, even though I’m ready and I think I could do it without crying, I kinda like having that rotten old cake around.  At this point, it’s even comical to me.  What an adorable metaphor for how broken we are, and how time…. in the most biological sense… certainly does NOT heal when you think about it.

I cast my vote for one more summer of yelling “disregard the cake” as others unexpectedly find themselves staring at the decomposing leftovers in the beer fridge.  And if you try to make me feel better by explaining how time heals, I might ask, “Have you seen my cake?  Because time certainly didn’t do any favors there.”

Posted by Cindy Campbell at 8:14 AM 8 comments: