Goonies and a Hockey Game

It’s been quiet here at the Campbell house.  We just keep on keeping on.  Life has fallen into a very busy routine and of course part of that routine will always include missing Ty.  Thankfully, "our new normal" (or so they call it) has been pretty normal lately.  After some serious rough spots around the holidays, things have fallen into place and we are doing well.

On Wednesdays, I work at the TLC Foundation all day until I have to leave to get Gavin off the bus.  It is the only day we don’t have anything to do after school so I like to cook a nice dinner and plan for a movie.   Tonight I went with some of my all-time favorites – fried chicken cutlets with sautéed bacon brussel sprouts, followed by The Goonies.

We picked up the movie at the library, which is something I love to do with Gavin.  Of course we have Netflix and it’s easier to point the remote, but I still enjoy the act of going to the library with him.  I love the familiar musty smell upon opening the door.  It feels almost like walking into a vacuum - the silence that hangs in the air almost sucks you in from the cold outside air.  We often pick out a book or two and read together in the children’s section before heading over to the DVDs.  The selection is sparse and dated, but there is something about the tangible DVD case that makes Gavin’s eyes wide.  He loves to look at the pictures, to hold a stack of DVDs and to debate his options out loud as I try to shush him the entire time (“quiet, we are in the library!”).

I recently decided that I want to introduce Gavin to Star Wars.  It is something I’ve been avoiding for over a year because I know that means a whole new world of toys and lego sets and bedroom decorations that he will be begging for.  But after 3 years of super heroes, I’m ready for a change and so is he.  After consulting with my neighbor, it was decided that we will start on 4, 5 and 6 (the originals) before watching prequels 1, 2 and 3.   I was ready to spend the night on the couch with ice cream and Han Solo, but alas, it wasn’t meant to be.  The collection at the library only included the Ewok Adventure and The Clone Wars.  Sigh. That’s the one downside to the library…

Never fear!  While searching for an alternative, I noticed Goonies on the shelf and gasped with excitement.  Gavin looked at the pictures on the back, saw the pirate ship, and he was hooked.  If I were to pick one movie from my childhood that stands out as a favorite – there is no doubt it would be The Goonies.  It stands alone!  Watching it again for the first time in probably 20 years, I could still recite my favorite parts, and Gavin thought they were as funny as I did.  He especially loved how many times the kids say “oh shit!” with the references to "Boobie" traps coming in a close second.  I swear, I still want to be a Goonie.  Don't you?

Then on Friday night...

We attended a Trinity Pawling Hockey Night in memory of Ty.  Gavin wore his awesome "SuperTy" hockey shirt, and he threw out the puck.  It couldn't have been more fitting that the students and attendees chose to honor Ty by wearing SuperHero costumes of all sorts, and as a result Mellissa had a great idea that we should push to have "Super Hero" fundraisers in schools across the state!  We often have Pajama Day fundraisers but after seeing all of the great kids in costume - all for Ty - we realized we could do better than that.  Super Heroes for SuperTy and all the super kids fighting cancer today.  It's just such a perfect fit.  What an incredible honor it was.  If you are interested in presenting this concept to your school, club or daycare, please email mdivitto@superty.org. 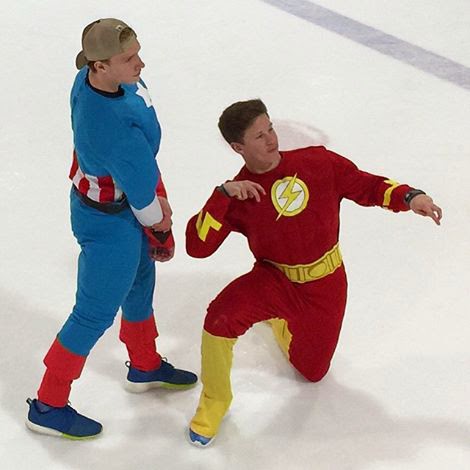 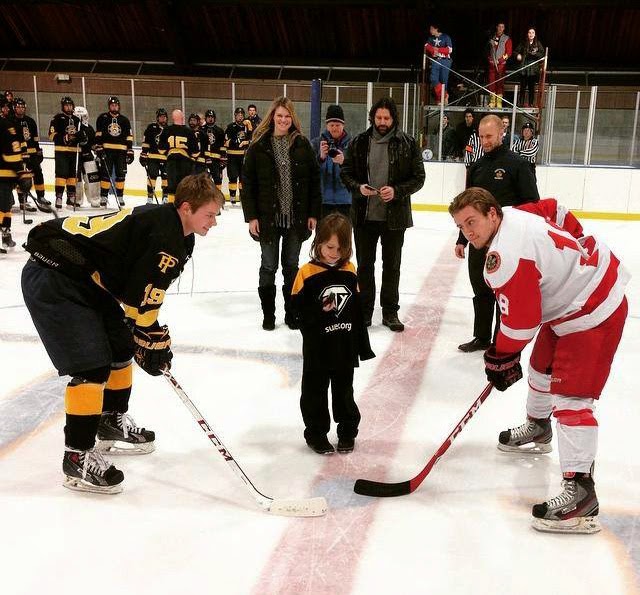 What a great night, and an even greater group of guys.  When I looked around the hockey rink that night, I saw posters hanging that read "We Love SuperTy" and "All for Ty" and I cried a happy tear.  He is remembered, and I can't tell you how much that means to me.  It's all that matters sometimes.  The only thing that keeps me going.  Because I made a promise to myself that his all-too-short life will have greater purpose.  Thank you all, so much, for helping me make good on that promise.  And to Spencer Strauber, who wrote an article on SuperTy in the school paper, The Phoenix... I hope you continue to write.  You have a powerful written voice, and you will continue to inspire others with your words.  Thank you for taking the time to pay tribute to Ty on a day you didn't have to (headmaster called an impromptu holiday) and thank you for choosing to by-pass Tom Brady and "Deflate Gate" and instead write about my son.

"Ty not only naturally adopted his admiration for super heroes as a young boy, but little did he know he would become one for the whole community. SuperTy was as super as they come."

I couldn't agree with you more, Spencer.  Thank you.