I wrote this post last night, but couldn't get online until this morning.  Ty is awake.  He is feeling okay.  No improvement in his eyes yet, but that should come quickly.  Here's what happened.

The shunt.  Need I say more?

Today, I hate my life.  I hate how cancer destroys everything even when Ty is cancer free.  We had so much planned for this weekend.  Fun plans for Ty and Gavin so we can pretend that we are a normal, happy family before the next week filled with oxygen treatment, needles, meds and therapies started up again on Monday.

It was such a beautiful day today.  Lou allowed me to sleep late with Ty while he went out for breakfast pastries.  My mom was visiting and she had coffee ready when I came downstairs around 8:30AM.  I dressed Gavin in the most adorable outfit, ready to celebrate field day at his preschool (the same one that Ty used to go to), and my sister drove all the way from Long Island to spend the day with me.  I felt really good this morning and I was so looking forward to seeing all of our friends at the school – especially Ty’s teachers.  Ty, on the other hand, was still sleeping when my sister arrived at 10AM.  I had a hard time waking him, only to have him fall asleep again on the couch downstairs.  The panic started to set in.  I called on Lou and told him we probably had to go to the hospital.  He agreed.  I cried and cried.   We didn’t arrive until about 2PM which means Ty was pretty much asleep for 19 hours straight. 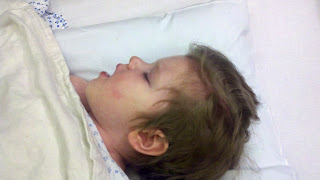 I noticed that Ty wasn’t doing so well over the past couple of days, but I never thought it could be shunt related until Friday during PT.  He was giving everyone a really hard time about participating in the activities.  His therapists were concerned and decided not to push him – to just call it a day.  We had the nurse examine him because I noticed his eyes were crossing a bit.  I had a bad feeling in the pit of my stomach and I called Lou to make sure he watched the team reprogram Ty’s shunt on Wednesday after the MRI.  He did.  When we all got home Lou thought I might be overreacting about Ty’s eyes, because he was otherwise doing well.  Then, when we saw how tired Ty was this morning it also occurred to me that Ty had been wetting his diaper over the past 48 hours instead of asking for a “pee-pee can”.  That is unlike him.  All signs were pointing to increased intracranial pressure.

Again, we found ourselves driving 90 miles an hour to get to Memorial Sloan Kettering.  I had to yell and shake Ty every five minutes to make sure he could still be aroused.  At one point he wouldn’t open his eyes and he wouldn’t say anything I asked him to (Ty, can you hear me?  Say “yes”!  Say something Ty, say “Mommy”  You have to say something!!)  Then Lou said, “Say boogers!”  With his eyes still closed, I saw a smile come across his face and Ty said “boogers” loud and clear.  Always the clown, that kid.

We were on the phone with the hospital on our way in, so we were told to go straight to CT on arrival.  The scan showed that his ventricles were much larger compared with Wednesday’s MRI and he was indeed suffering from hydrocephalus.  His mediport was accessed and he went to the OR within just a couple of hours for a shunt revision.   Lou and I waited in the lobby.  It was strangely quiet.  We were practically the only people there.  The hospital is lonely like that on the weekends.  Surgery took longer than I would have liked only because my nerves are shot, but when the surgeon arrived I was immediately relieved when I saw the calm in his face.  There was a clog in the tubing, he replaced it, and Ty was recovering upstairs before being moved to the PICU across the street.


I am relieved that this was a problem that can be fixed.  When Ty came out of the OR he was pretty banged up.  He has a large, bloody incision, larger than two inches, on the top of his head.  He has a large cut on his top lip and it’s swollen from all the metal tools that were in his mouth during intubation.  He has a bruise on his leg where they placed an arterial line and bruising on his neck where the shunt tubing must have been moved around quite a bit.  There are a couple of other nicks and scratches – we never know where those come from and would love to be a fly in the wall during surgery.  Well, maybe not, I would probably pass out.

When we kissed Ty goodbye in the hallway on the way to the OR, we think he knew what was going to happen.  He never cried like that before surgery.  He’s older now, though, and Lou and I think he was fully aware of what was about to happen.  Breaks our hearts.  This marks surgery number 17.  The first in 2012.  Let’s hope it’s the only one in 2012.  He’s in the PICU right now and I ended up getting a room at the Ronald McDonald House because only one parent can stay with him.  I laid in bed and snuggled him for an hour before leaving, though.  It was hard to get out of that bed, but if I didn’t I would wake up in a lot of pain and I can’t afford back or shoulder pain with how often I need to carry Ty around from place to place.   He’s no spring chicken anymore, I need to make sure my back is in good shape so I opted to sleep here :)

One of my favorite conversations from tonight was with Ty’s neurosurgeon.  When Lou asked him what his thoughts were on Wednesday’s MRI he reminded Lou of what he said to me when we bumped into one another in the hall.  He said, it has to be radiation effect.  “But, not necessarily necrosis?” Lou asked.  “Right,” he said, “because necrosis is permanent and wouldn’t improve like we are seeing on Ty’s scan.  There are all types of side effects people can face years after radiation… Luckily, what happened with Ty is probably recoverable.”  Recoverable.  If it wouldn’t have been so incredibly inappropriate I would have leaped across and kissed him.  That’s a beautiful word that is filled with hope and to hear him use it made my heart skip a beat.

As I left the hospital tonight, I saw an adorable old man walking in.  He was in a crisp, off-white suit with a pink button down, a fancy cane, and he carried a bouquet of red roses.  “I’m going to be a grandfather in about ten minutes” I heard him declare proudly.  So sweet.  Not everything is bad news in hospitals.  I couldn’t help but thinking about how so much life was going on around me, even though my whole world seems to be at a standstill.  On my way to the Ronald McDonald House there were people all over the streets.  Couples holding hands, young girls and guys spilling out of bars, music blaring.  It occurred to me that it is Saturday night in the city.  I used to be just like those people.  I miss it, but wouldn’t trade it for the world.  I know I said I hate my life… but I only hate it today.   Soon I will be on my way home again with Ty in the backseat, windows down, wind in our hair and smiles on our faces.

This sucked.  But it was fixed.  Thanks to Ty’s amazing doctors.  Thanks to God.
Posted by Cindy Campbell at 9:40 AM