I'm sorry that it's taken me so long to share updates. The last few days have had their fair share of ups and downs... fun and fear... but mostly fun (thank God). The few nights that I was online attempting to post an update turned out to be pretty rough. Ty has been more restless than usual, and just as I would get comfortable with my computer in my lap I would hear him crying. Sorry everyone, but snuggling up with my little man always takes precedence over everything else :)

I'll go ahead and get the "fear" part out of the way because it is weighing on my mind and it always feels better to talk about it. Three nights this week, Ty woke up in the middle of the night whining. He was only half awake and he wouldn't talk to me when I asked what was wrong. His behavior reminded me so much of how he used to be as a toddler just before his diagnosis. He was whimpering while holding his head and there has been a lump in my throat ever since. Lou and I are both carrying some extra weight on our shoulders every day as a result, and we are very much looking forward to his next scheduled MRI so we can get the good news and breathe better.

Ty's next MRI is scheduled for Wednesday, February 29th. Leap year luck, right? There are several reasons why I know it will be fine, but that doesn't stop us from feeling on edge. First, because Ty had an MRI in late-January and it was perfectly fine. Not much time has passed since then so it isn't likely there is anything large enough to be bothering Ty to the extent that it would keep him up at night. Second, because Ty is unable to turn himself over in bed so sometimes he cries and whines when he's uncomfortable and needs us to help adjust his position before he can fall back to sleep. Third, because his story is so inconsistent. I woke Ty up two nights ago to talk about why he was whimpering. He was reluctant to answer, and when he did his story was hard to decipher. He said he had head pain (oh my God, it was like the string that holds my heart in place just snapped), but then he said he just missed me and wanted me to sleep with him. In the morning when he woke, he told Lou that he didn't have a headache the night before, but when I asked him later that morning he said he did.

So, as you can see, it's not easy to really know what Ty is telling us. He's all over the place and he changes his story on us, so I am trying not to worry about it. Last night he was tossing and turning all night, and whining on and off, but he insisted he did not have any head pain. He also has a bit of a stuffy nose, so perhaps his head is congested and causing a little discomfort. It could be anything, as long as it's not cancer, right? That's all that matters. Look at this face... this is the smile of a boy who is otherwise feeling great! 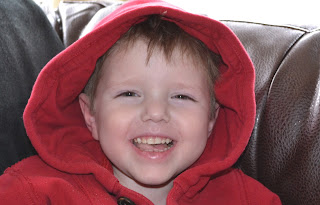 Now, onto the fun stuff.  Over the past week we have had a lots and lots of it.  Valentine’s day was so sweet.  Ty changed the words to the Spiderman song to:  Valentine.  Valentine.  Would you be my Valentine?  (Instead of “Spiderman. Spiderman.  Does whatever a spider can…”).  He’s been singing it over and over and over and over again.  I am so proud that he came up with something like that all by himself.  It really reassures me that he is doing perfectly fine and doing things that any perfectly normal four year old kid would do.  Ty also received some very special Valentine’s Day packages in the mail throughout the week, and it always brightens his day (and Gavin’s too).  Here's Ty opening a box filled with love.  What more could anyone need?  I save every single letter that anyone sends to Ty, because I know he will cherish them just as much as time goes by and find strength in them as he gets older.  Thank you to all of the thoughtful families who put these together for Ty this Valentine’s Day. 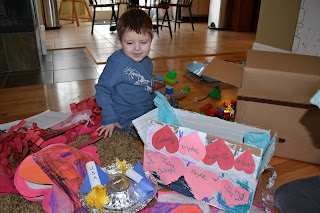 On Wednesday, Lou, Ty and I spent the day at the hospital for his bi-weekly infusion.  He was such a good boy at the clinic, so we let him visit the vending machines and the candy store downstairs at the hospital (always a very big deal for Ty).  His doctors and nurses agreed that he is doing very well, and they are so happy with how he is responding to his daily chemo now that they lowered the dosing across the board.  On our way home, we stopped at Nana and Papa’s house to cash in on some big hugs and kisses and Ty was so sweet.  He loves being with his grandparents so much.

Thursday Ty went to preschool and he returned the class pet, Spot.  He was SO PROUD when the teacher read his journal entry to the rest of the class.  It’s moments like that when I am so thrilled to be there with him, sharing in his everyday preschool experiences.  They held an adorable Winter Olympics upstairs at the school and Ty reacted pretty much as I expected.  He was excited at first, then overwhelmed.  He often shuts down when there is are physical activities that he can’t participate in.  He didn’t get upset at all, which is great, but he sighed and told me he was bored even though it was one of the more exciting events that takes place at preschool.  When everything slowed down toward the end, I showed Ty that the make-shift obstacle course was empty and I asked if he wanted to give it a try.  Just as I thought, he had a big smile on his face when I put him down and helped him to jump over the hula hoops and climb the bridge.  He wanted to do it after all, he just needed some space.

Gavin went to his preschool class on Friday and he had a lot of fun, too.  He is getting so big!  Not to mention, so handsome.  He will be three years old in April.  I can’t believe it.  Where did my baby go?  I have to start planning a birthday party for him.  Last year he shared his birthday with Ty because Ty's half birthday is April 4th, but this year we are going to forego the half-birthday celebration since Ty is feeling so well and just focus 100% on Gavin. 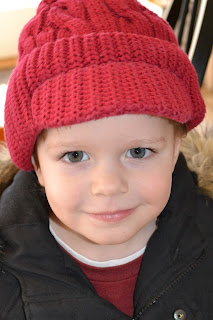 This weekend was especially busy.  We have been all over the place.  One of Ty’s very first friends, Kate, has two new twin brothers and we were delighted to celebrate their christening in Long Beach on Saturday.  The babies are so incredibly cute I could just eat them.  I miss that a lot.  Time just goes too fast sometimes.  The party for the twins was so great.  They had a DJ for the kids that kept Ty and Gavin entertained with games and dancing.  They were having a lot of fun which allowed Lou and I to make up for a lot of lost time with our old neighborhood friends from Long Beach.  All of the kids are getting so big!  It was so exciting to see everyone, and to see how the more things change the more they stay the same.  They are all such great people, and so loving.  I look forward to seeing everyone again at the Robert Manzoni Memorial Fund Gala this March.  This is a very special organization and we would love for anyone and everyone in the NY area to join us there!!

After the christening, we had dinner with more great friends in Long Beach and we enjoyed the most delicious sushi!!  God, how I miss good sushi.  I don’t think it exists upstate.  We spent the night at my mom’s house and all day Sunday was a blur.  We completed our daily ritual of going to the supermarket and candy store.  We visited with Aunt Dawn and her new baby girls.  We played with Grandma, Pop-pop and Great Granny for hours on end.  We went down the block to visit with one of my great high school friends and her family (she lives right around the corner from my mom) and we got to see my cousins Debbie and Laura who I miss so much.  I was so happy they stopped by my mom’s house, it has been way too long since we've gotten together.  They gave Ty a gift card for Toys R Us and he later did the cutest thing.  As we were driving home late tonight, Ty and Gavin were asleep in the back seat.  Ty woke up in a half-asleep buzz and said… in a panic… “Mommy!  Where’s my Toys R Us card?”  I told him, “Don’t worry, Daddy put it in a very safe place.”  Ty answered, “Good.  I like that card.  I like that a lot!”  Of course he does.  He can buy his two favorite things at Toys R Us.  Toys and Candy!

Before signing off, I want to share this beautiful picture of Ty and Gavin.  I used to long for these moments when Ty was sick.  I hoped and prayed and believed that he would be able to have fun with his toys and play with his brother again.  Praise God.  Thank you for your love and support.  Please continue to pray for Ty’s improvement.  Believe that his cancer will never ever, ever, ever, ever come back. 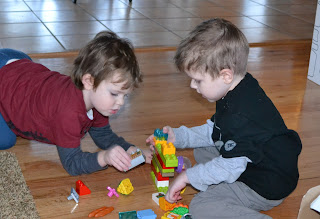