For some reason, the titles on my latest posts have not been showing up on the site.  In case that happens again tonight, I want you to know that the title for today's entry should read, "Two Steps Forward."  That is because Ty took two steps all on his own.  He has been increasingly brave over the past two weeks and he has been letting go of our hands to stand on his own for several seconds at a time.  Tonight, he decided to walk forward and he was able to take two small but steady steps before grabbing for our hands again.  I think he is starting to realize how important it is for him to just take a chance and give it a try.  If he is going to walk on his own again someday, he has to start somewhere!

This is all so wonderful and new.  I feel more excited today than when he took his first steps at 10 months old!  It is also a bit scarier now than it was then.  When he was a baby, he was used to falling over.  He was wobbly, he fell on his bum, he picked himself up and everything was fine.  Ty at four years old is very weak, so he won't be able to catch himself if he falls.  He doesn't have the strength in his arms to stop himself from hitting the ground... hard... but that doesn't stop him.  Besides, he knows that Lou and I will ALWAYS be there to catch him.  I am just so proud of him.  Everything about him really is extraordinary.  He is one super kid.

It's hard to tell, but Ty was scooting away when we took this picture.  I pray that today has inspired him to be up on his feet more and more! 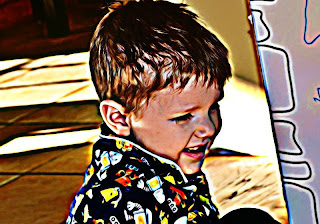