Is October over yet?

It's a tough month.  It's as simple as that.  I thought I would be okay, because in general I've been getting by pretty well, but I was wrong.  Lou was wrong, too.  I am borrowing this from my friend Andrea (Riley's proud mama), because it couldn't be a more appropriate depiction of how we have been feeling for the past 4 weeks. 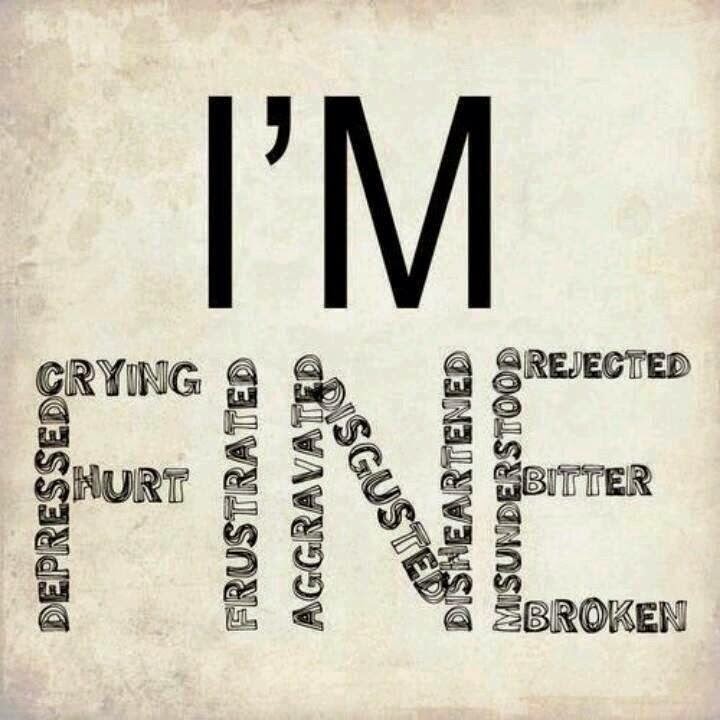 But despite these feelings, we prefer to tell everyone, "I'm fine."  Because it's easier.  For all of us.

How fitting. Lou just walked past me as I was typing and saw the graphic posted above.  He joked, "You're not fine... You're crazy."  I told him to take another look at what it reads.  He leaned in closer for a double take and he laughed out loud at the perfect irony.

Colleen and I always shared our awesomeness - both of us having birthdays in October and simply adoring the fact that we are Libras.  Because - as all Libra's know well - being a Libra is simply the best.  When Ty was born just days after me, I relished in the fact that we were guaranteed to be two peas in a pod.  He would totally "get" me, and I would totally "get" him, because our beautiful little Libra minds were wired the same way.  On my birthday Colleen texted me a "Happy Craptober" message, and I laughed and cried simultaneously as I thought about how much I can't wait for this month to be over.  Hope you all had a happy Craptober.  Just a few more days and I'll be fine.  Like a zombie on Halloween at midnight, I will emerge from under this dirty pile of grief with my arms in the air - a survivor once again (just before I eat some brains) :)

Lou just pointed out that there is a ladybug on the ceiling right above me as I write.  There has certainly been no shortage of ladybugs this month.  In fact, there hasn't been a single day since October 17 (the anniversary of his death) that I haven't been able to find at least a dozen in my house.  In fact, the other day was a particularly tough one for no particular reason so I took the video camera out to document the fact that there were 52 ladybugs in my kitchen alone.  52 - that is not a typo.  And like I posted earlier - it's not just the ladybugs.  I am fully aware of the science behind the ladybugs and why they are here under these weather conditions and such.  I am aware that my house is not the only house that has been invaded (and, PS, if yours is one of them you should remember they are a sign of good luck and spirituality).  It's the fact that they are here when I need them.  They won't leave!  But by November 1st I am pretty sure they will be gone. Not because the temperature is dropping or what-not, but because Ty knows we will be better when October is behind us.

But don't worry.  I am certain that on a cold winter night, out of nowhere and maybe just after I talk about Ty, I know one will appear above me once again.  Because it always seems to work that way, and that is Ty's promise to all of us. There is something so much more than "this."

Halloween is the last tough day to get through and I just can't stop the memories from pouring in.  They are intense and I am actually very happy about that.  Knowing that I remember every year, every costume, is something that I am beyond grateful for.  Because my greatest fear (and any bereaved mom will agree) is the fear of forgetting.  I remember the Halloween parade at Memorial Sloan Kettering.  I never shared this picture because we look terrible.  We had to go to clinic for our weekly post-chemo check-up and Ty had mouth sores - it was about 3 weeks after his 3rd birthday.  He was too uncomfortable to wear a costume for the hospital "parade" so we went with Spiderman PJ's.  I thought I looked like such a train wreck in this picture and refused to share it ever since. HA!  I had no idea what was ahead - I didn't even know what trainwreck meant yet.  I also didn't share this picture before because his eyes were swollen and red underneath, he has a mouth sore, and he just looks sad.  But it sits in my office on the board above my computer and I have stared at it many times when talking to him.  This is a fond memory of mine, even if it's hard to look at. 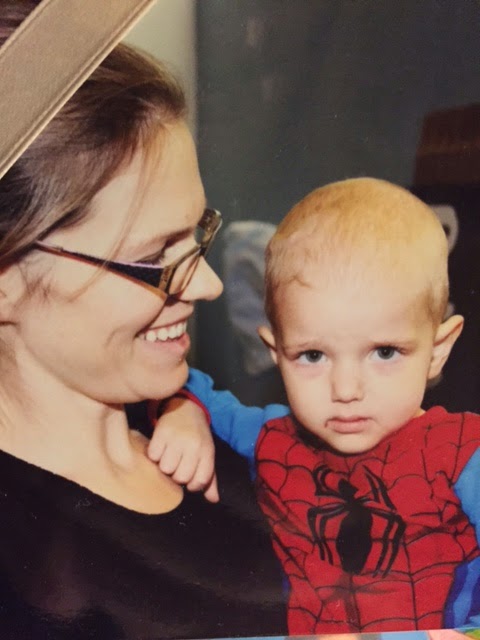 Lou and I went to a Halloween party the other night that was hosted by one of our incredible board members, and all I can say is "Thank you."  We got out, it was so good for us, and I got to see so many people who I love and who I want to be in touch with more often but just can't find the strength to put myself out there sometimes.  I'm happy to say we shared some a whole lot of smiles during this otherwise difficult month.  (thank you, Mellissa).

I am disappointed with my Halloween loot this year.  Ty would be, too.  And that makes me mad at myself.  But I let my mood get the best of me and I didn't buy the candy I always promised I would (the eyeball chocolates, the gummy earthworms, the booger gum and the marshmallow insects) but after I realized how disappointed Ty would be, last night I invested in several bags of Ring Pops (lucky kids will get the blue ones), Starburst (pink were Ty's favorite - and everyone's, really, right?) and sour patch kids.  Not as cool as the years before, but I hope he is still proud of his mama for picking out his favorite things.  Tonight we carved a Jack-O-Lantern that Gavin designed and I just know he would have approved.  I feel he was with us.  Which is also why I was compelled to write after such a long silence.  Thank you for waiting and caring and sharing and supporting us through all of this.  XOXO.  Happy Craptober to you all :)

Posted by Cindy Campbell at 9:27 PM