Back to the grind

Ty is totally amazing.  Today was awesome.  Yesterday, too.  Tomorrow we go back to the grind.  We will return to our routine oxygen treatment in the morning, and possibly school/therapies in the afternoon (although I'm considering letting Ty play hookie for one more day so we can have some fun).

We got home yesterday evening and a bath was the first thing in order.  We needed to wash all of the surgical grime that covered our poor baby, and he was happy to do it.  Despite the fact that he just had surgery Saturday night, he is feeling terrific and his pain is practically non-existent.  Two weeks ago we would never be able to move him or pick him up without him wincing in pain.  Today he is so much better off.  It is unrelated to the shunt surgery, but probably due to the improvement we saw in the brainstem area during Ty's MRI Wednesday.  The swelling is gone (thank you hyperbaric oxygen chamber!) and he is like a new kid.  Finally, he is feeling good.  Awesome, in fact.

His physical strength is still slow to follow, but Lou and I see improvement every single day and we are filled with hope.  We are excited because we have so much faith in Ty's recovery.

Just a couple of things to point out before I post the pictures of tubby time.  Ty was returned from the OR with a huge open wound on his cheek. It is from the tape on his face that held the tube in place (he was intubated for the duration of the surgery).  Someone in the OR was completely careless removing that tape, and ripped off several layers of skin along with it.  I am up in arms over it.  Regardless whether or not a child is under anesthesia - or a patient of any age, for that matter - they should be treated with the utmost care.  This is just another wound on my poor baby that was totally unnecessary and could have been avoided.  Hopefully the oxygen therapy will help it to heal quickly, along with the incision on his head.
﻿﻿﻿


It turns out that the shunt malfunction was due to a clog in the tubing that runs from the ventricles in Ty's brain, through the burr hole in his skull, and into the valve that sits right under his skin on the side of his head.  The valve then has another, longer piece of tubing that is attached to the bottom that runs all the way into Ty's abdomen to drain excess CSF fluid into his body cavity.  To help you visualize a VP shunt, I am attaching an illustration of the concept, and a photo of the hardware. 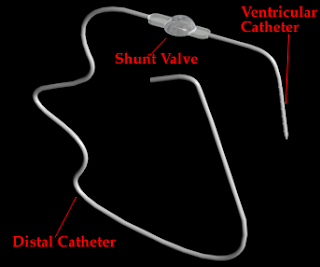 Lou and I actually watched a video of a similar surgery performed on a small child (thank you, you-tube) just to better understand what Ty has been going through.  It was totally ﻿brutal (yet fascinating) to watch, especially when the tubing is snaked from the top of the head into the abdomen.  I'm glad that wasn't necessary this time around.  His surgeons only had to replace the one piece of tubing up top - even the valve remained in tact.

Ty is one super kid.  This was his seventh shunt revision in 18 months.  That is practically unheard of.  His neurosurgeon can't provide a theory as to why the tubing would ever get clogged, no one can, but it's just the way things seem to happen for poor Ty.  Nothing is easy for him, yet he always prevails.  He is such an incredible inspiration.  And he's only four years old!  Imagine how amazing he will be when he's forty!  :)

One last medical update.  Ty started his next cycle of daily chemo (temodar this time).  He got sick twice last night, which was really upsetting for everyone.  After the second time - 3 in the morning - he gave me the biggest smile in the world and said "now I peel bedda."  We stayed up joking around and cleaning up for about 15 minutes or so before drifting back to sleep in our best snuggling position.  I hope he tolerates the chemo better as this continues.  He usually does so well, but I imagine with all he's been through over the past few days his belly is just extra sensitive.

Thanks for all of your love and prayers.  Goodnight.