It's good to be home again

Ty had his radiation treatment early this morning and we were discharged around noon.  His team was very happy with how much he has improved, but not as happy as Lou and I.  Once home, he even ate a few bites of steak, four teeny tiny meatballs, a couple of pieces of cashews and four bites of cheese.  That's more than he has eaten by mouth over the past four weeks!

I also offered him a blue ring pop which he happily accepted.  It was too big for him, though, so I had to melt it down under running hot water for several minutes.  Then, we opened a thoughtful package from some of Ty's favorite fans here at our local bank!  The girls at Chase in Patterson had been setting aside the blue lollipops in a box marked "Ty's lollipops" because those are his favorite.  They began to really add up since we haven't made it to the bank in quite a while, so they mailed them to us along with a care package and Ty's mouth dropped when he saw what looked like 100 blue lollipops!!  It was very sweet and very thoughtful.

I also received my own package today in response to a recent post.  My friends Caryn and Mike felt bad when they read my blog post about my crooked glasses, so they sent me some new ones to choose from.  I let Ty pick out the glasses for him, Gavin and me - see below.  He's such a sweetie because he gave me the prettiest ones :)  I can't post these pictures without also sharing that another friend, Beth, works at Luxottica and has hooked me up with some major discounts on some "real" new glasses, too.  THANK YOU.  In the meantime, I will make due with the glasses Ty picked out for me below.  They aren't too bad :) 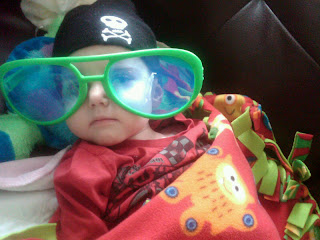 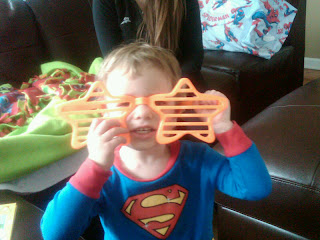 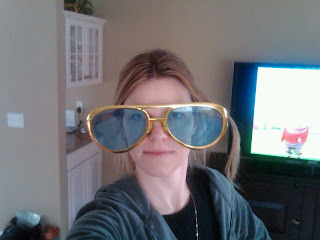