A tough weekend filled with blessings

Ty and I drove home from the hospital Thursday evening grinning from ear to ear and leaving a trail of dust behind us.  We don't need to return for a follow-up appointment until Friday and we were so excited to sleep at home after 12 nights sharing a hospital bed.  The past three days have been tough because Ty still has a long road to recovery, but it's also been sprinkled with enough beautiful moments to allow Lou and I to appreciate how lucky we are.  Like when Ty opened up a package from a complete stranger (sent via an old friend of Lou's) that included this Nemo doll.  The doll is the same that another little boy names Carson carried around when he was diagnosed with cancer at 3 years old.  He is now cancer-free at 7 and his mother was inspired by our little fighter to send this very special memento to Ty.  Nemo's character represents everything that our little boy is, a fighter who is filled with love and never gives up :) 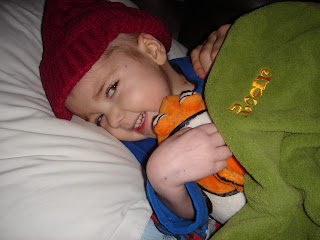 Or, the time that Gavin climbed on top of his brother, laid down and closed his eyes as if to take a nap with him when Ty first got back the hospital.  That routine got old quick, though, and resulted in Ty yelling and me pulling Gavin off of his brother over and over again throughout the weekend.  Typical brothers.  Gavin likes to grab Ty's hats and run away with them.  Ty does NOT think it is nearly as funny as Gavin does.  Still, we enjoy those very normal moments of annoyance in the household.  Speaking of Gavin, look at the mess he made for his poor Dad this evening. It's hard to make out, but that is a piece of corn on his forehead. Menace!  :) 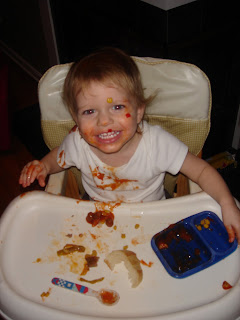 Ty is amazing.  The picture below was taken only 8 days ago, yet he was sitting up all weekend, telling jokes, smiling a lot and we even made it out to the dollar store and the supermarket today.  Ty did get sick and throw up in the dollar store, but we were prepared and he brushed it off immediately.  He asked for a Ring Pop and we were on our way. 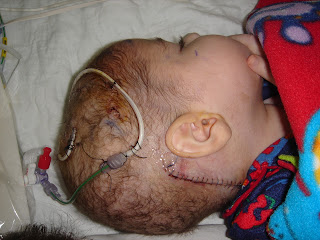 ﻿Last night, Ty allowed me to hold and snuggle him for the first time in weeks.  He is usually too apprehensive about moving his head around and he thinks it will hurt if I hold him, so I know he must be feeling better.  He fell asleep as I cradled him and I just couldn't help but begin weeping and weeping.  The tears just wouldn't stop.  He's grown so much over the last six months (and in so many ways), but his face is the same face I've been staring at for hours on end as he lay in my arms since the day he was born.  He's the most beautiful thing in the world.  Please God, don't ever let my arms be empty.
Posted by Cindy Campbell at 11:00 PM